A new trend has taken hold among stud breeders viz. to allow fellow breeders to sell rams at their auctions as “guest sellers”. Results of such “joint” auctions necessarily had to be indicated separately under production auction results. In some cases, breeders have also combined their production auctions with a promotional auction to get better exposure. Such results are also indicated under production sale results. As a result of this method of reporting, the support of promotion sales seems weak. Indeed, these types of auctions play a vital role in marketing Dohne Merino rams and the breed as a whole.

Only 56 rams were sold at an average price of R9 723 in 2019. The Southern Cape promotion sale remains the main auction. Congratulations to Daniel Giliomee who also achieved the highest price for 2019 at a promotional sale of R20 000 for one ram at this auction. It appears as if renewed interest in the Ermelo auction is taking place. Although unregistered rams were sold this year, we trust that the two new stud breeders will continue to offer better rams. Their pioneering work can mean a lot to the breed that has traditionally had a large market share in the area. 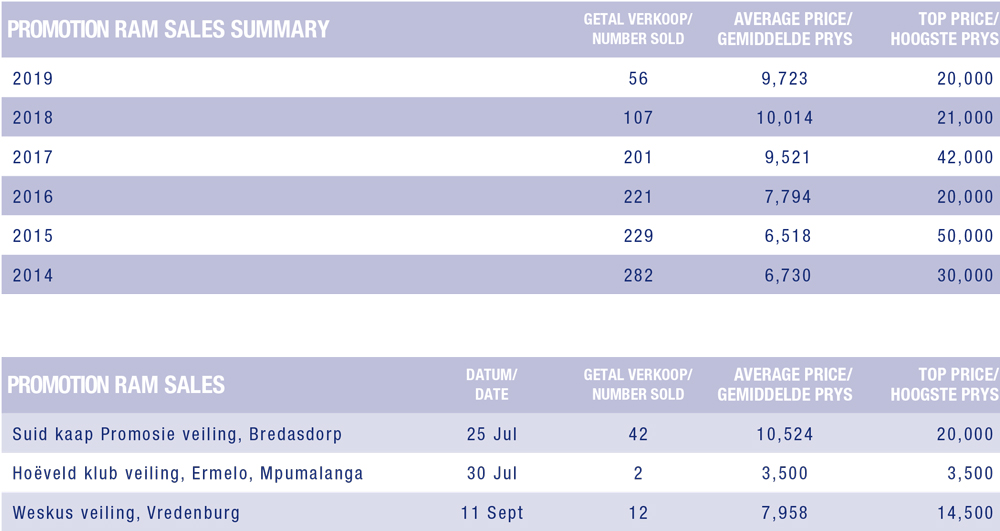