The Year, 2017, was marked by the selling of a Dohne Merino ram at the all-time record price of R220 000.   All ram sales went very well, and the overall sales average were, for the first time, more than R10 000.  The success of our breeders is remarkable in the wake of the generally negative farming and economic conditions.

The main reason for such an exceptionally successful year, may largely be ascribed to the marketing efforts by our breeders.  We also acknowledge the contribution of all woolled sheep advisors that, supported our breeders in such an able manner. Despite adverse farming conditions, product prices favored the positioning of the Dohne Merino breed.  Considering all these major contributing factors, only animals with proven merit, can compete in this increasingly competitive ram market.   The Dohne Merino is at the forefront of scientifically advanced genetic improvement and meticulous performance recording of all registered Dohne Merinos, is the foundation of the current demand for breeding material.   The report on activities of the breed during 2017 therefore serves as measure of our breeders’ effectiveness regarding scientific breed improvement.

Against the back drop of the demand for Dohne Merino rams, our breeders are encouraged to maintain the highest possible quality standards at all levels in their studs.  It is the character of our breeders that will ensure the continued stature and international success of the breed.

Membership of the breed declined by 8 members to a membership of 90 in 2017.  Accordingly, ewe numbers registered declined by 8 814 to a total of 33 704.  The decrease in number of studs may be ascribed to a few studs not achieving satisfactory financial results at selling rams, leaving the stud industry. Apparently, these breeders are continuing to farm with Dohne merinos and still support the stud industry.  It is trusted that these breeders will find a way to ‘rejoin the ranks in future’.  Breeding stud sheep in an organized manner, to provide the best possible adapted rams for your own commercial flock, remains a major motivation to the individual stud breeder.

Table 1  indicate the sad loss of one of our honorary members, Prof Gert Erasmus.  Prof Erasmus was one of the “architects” of the breed, and his loss leaves an “empty space” that will be difficult to fill.

According to Table 2, stud breeders decreased the size of their studs (only 39 studs with more than 300 ewes) to increase the supply of rams to clients.  The increased lambing percentage still indicate high selection intensity and a steady supply of superior rams to the commercial industry.

The decrease in the number of larger studs (300 or more ewes, possibly the result of economic decisions during a tough time, is to be regretted. Genetic theory proved that using numbers of stud sires (at least 8 or more) is necessary to counteract the effect of inbreeding.

Selection in the largest possible population is basic to the acceleration of genetic change. Estimating breeding values accurately by means of advanced statistical and other methods, assist in achieving higher rates of change in smaller populations. However, the combination of accurate information and numbers of animals, deliver the best results. One recommendation to cut the cost of stud breeding, is to save on additional feeding of stud animals
The challenge posed by the availability of accurate breeding values, is “not to put your eggs in one basket” but instead to maintain genetic diversity by identifying enough numbers of unrelated superior sires, which are well adapted to prevailing commercial conditions.

According to figure 1, the distribution of Dohne Merinos per region in 2017 remained the same as for 2016. Region 6 (Eastern Free State and KZN) has the largest number of stud Dohne Merinos ewes and region 4 (Western Cape and Western Karoo) remain the smallest. 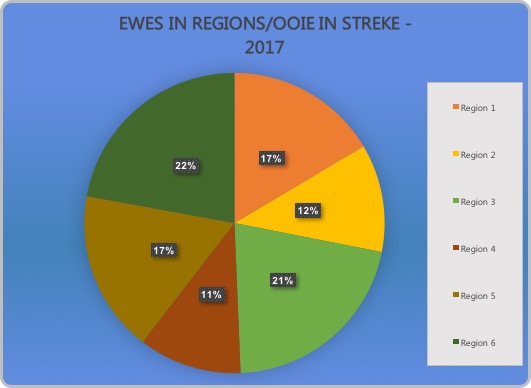 3 Lambing percentage
Surprisingly, the lambing percentage for all studs in 2016 was 144% compared to 138% in 2015. The higher lambing percentage, despite drought conditions continuing, may be, contrary to all expectations, the result of improved management and feeding. Breeders are financially dependent on continuous supply of quality genetic material to the commercial industry. They can therefore be congratulated for successfully pursuing this objective despite difficult farming conditions

4 Inspections & selection intensity
Table 4 indicates the number of sheep approved, expressed as a percentage of the number of lambs present at final inspection (12 months). According to the figures in Table 4 the high standard of particularly ram selection was maintained for 2016. This excellent result indicates that Dohne Merino breeders maintained the high standard set regarding breeding material for sale.

A total of 7629 F3 ewes were inspected during 2016 and 552 (7.2 percent) were approved. During 2015, in comparison 6.8 percent were approved. The total number of 1560 ewes more inspected than in 2015, is encouraging. The number of ”upgrading studs” entering the system declined. Statistically more of our established breeders made use of the upgrading system to introduce hardiness and adaptability by means of this effective filter
Table/Tabel 5 Number of F3-ewes inspected/Getal F3-ooie geinspekteer

5 Sales of breeding material
The total number of rams 2,603 rams sold during 2017 at an average price of R11 067 resulted in an unexpectedly high turnover of R28,807,401. The total number of rams sold however, remains 171 rams sold less than the mark set in 2014. The average price for 2017 is 20.7 percent higher than for 2016. The trend of selling less rams at higher prices therefore continues for several years now (Table 6). Table 6 also proves that the breeders who left the society, had no influence on official public ram sales. The commercial industry increasingly applies techniques to accelerate reproduction rate such as AI, laparoscopy and even embryo transplants. Progressive commercial farmers are therefore prepared to pay higher prices for top genetic material to use in these programs. The danger of these practices may of course be that the effective population size may decline. The long-term results if not acting pro-active, may be reduced genetic variation and increased levels of inbreeding. Dohne Merino breeders therefore have a responsibility to advise their clients on how to avoid these possible disadvantages. Breeders also need to carefully consider the numbers of rams sold compared to higher average prices. From a marketing point of view, it is essential to balance supply and demand. However, the Dohne Merino brand is associated with quality rams which are commercially adapted. Stud breeders who are not overfeeding their animals and perform basic scientific selection in the prescribed manner, can be rest assured that their animals, at market related prices, will stay in demand.

6 Technical matters
6.1 Production recording
Approximately the same number of animals were tested in 2016 compared to 2015 (0.001% less). The total number of animals evaluated at 100 days declined by 12.6 percent in accordance with the decline in number of ewes. The fact that the same number of progeny were classed from less registered ewes serves as proof of more efficient farming by all Dohne Merino breeders. The proportion of animals culled between 100 days and final testing (18.52%) is in line with the society’s guideline to avoid possible biased final evaluation. It remains a worrying aspect that some breeders lag behind in following timeous recording procedures. Breeders that supply data shortly before results are needed jeopardize the accuracy of other breeders’ evaluations as well as the availability of updated sire lists.

6.2 Other technical matters
The first stage of the upgrading of the office computing system is complete and the new system proved invaluable to improve on the integrity of our data base. Phase 2 programming was started to realise submitting production data directly to the breed society.
7 Top Breeder awards Congratulations to the National Top breeder – Mr. Clark Rattray (Pleasant View Dohnes)
Clark Rattray provides top breeding material to the industry and is the driving force behind the breed promotion projects in KZN. The Dohne Merino Breed Society thank our sponsors – Virbac, BKB and Voermol who over many years make this prestigious event possible.
8 Administration
8.1 Annual General Meeting
After appropriate election of councilors, the following council was appointed: Koos Vosloo (president), Philippie Marais (vice-president), HW (Manie) Botha, Andries Greyling, Marcellene van Rooyen, Clark Rattray, DH (Boeta) Wessels, JH (Koenas) van der Westhuizen and Richard Armstrong.
8.2 Finances
The Breed Society’s finances were sound. Provision in the budget was made for the on-going maintenance program to upgrade the property in Stutterheim. The proposed attendance of the World Dohne Merino Conference in South America by the president and manager will also be provided for by the Society’s reserve fund.
8.3 Per capita fee
It was decided to increase the per capita fee by R1-00 to R18-50 to provide for better marketing of the breed.
8.4 Courses and Promotion
The society ‘s regular courses were very well attended, and the Grootfontein College of Agriculture’s information sessions were attended by 72 students. Congratulations to the officials that passed the Society’s inspectors course.
The exhibition at the Alpha expo as well as at the Aldam sheep school and Agri Mega week provided excellent exposure to the breed.
8.5 Staff
Outstanding service was provided by office personnel consisting of three employees and two temporary workers
9 Acknowledgements and thanks
The support of all the various organizations in the woolled sheep industry, including too many persons to list by name, who were responsible for the success achieved by the Dohne Merino Breed Society acknowledged with special gratitude. A special word of thanks also to all our sponsors, breeders and inspectors who are vital to the positioning of the breed in the small stock industry.