Background: Dystocia occurs when there is a failure in one or more of the three main components of birth: expulsive force, birth canal adequacy and fetal size or position [ CITATION Mee08 \l 1033 ]. Deutscher (1991) indicated that the major cause of dystocia is a disproportion between birth weight and the ewe’s pelvic area. This finding is also supported by Cook et al., 1993 and Troxel, 2008. It is concluded that an incompatibility in size between the maternal pelvis and the lamb at birth is largely responsible for the need of assistance at birth (Anderson, 1992 and Patterson & Herring, 1997). Measuring pelvic areas is not a “cure-all” against lambing problems; but it may be a useful aid in a comprehensive ewe selection program to reduce dystocia and perinatal instability
[ CITATION Tro08 \l 1033 ]. The perinatal deaths according to Cloete, (1998) are caused by stressful births ascribed to a 60% prolonged labour period which reduces lamb survival (Dwyer, 2003).

Aim: The aim of the study was to investigate dystocia in mutton sheep and to estimate correlations between the ewe’s pelvic area, birth weight of the lamb and body measurements on the lamb. The Dohne Merino breed was used as a control group.

Methodology: The study during which the pelvic areas of 434 young Dohne Merino stud ewes were measured, was conducted late 2018 at Crux Dohne Merino’s on the farm Geluksdam of Mr Wikus Bekker in the Southern Free State. The pelvic areas of the ewes were measured on 13 March 2018, approximately two weeks before mating. Thereafter, the young ewes (18.5 months old) were mated from 1 April 2018 for two cycles (34 days). Single mating was practised by mating one ram to 60 ewes. Measurements recorded at lambing included: Length of parturition, birth weight, birth status of both the lamb and the ewe, circumference of the lamb’s head and pasterns, the lamb’s shoulder width and lambing ease score. The ewes grazed the natural pastures until two weeks prior to lambing and lambing took place in lambing pens with a balanced pelleted ration.

Results and Discussion:
The pelvic areas and mating weights of the 434 ewes is indicated in Table 1. Closed-circuit television (CCTV) was used to film the young ewes during parturition (picture 1). Eventually 191 ewes out of the 434 could be successfully filmed, out of which 274 lambs were born. 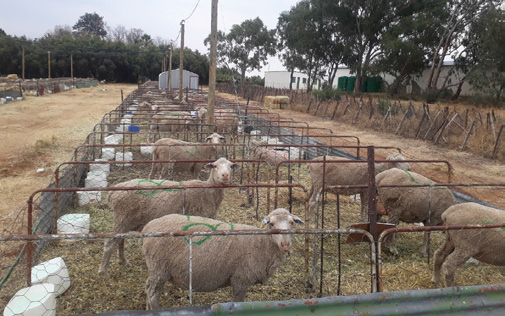 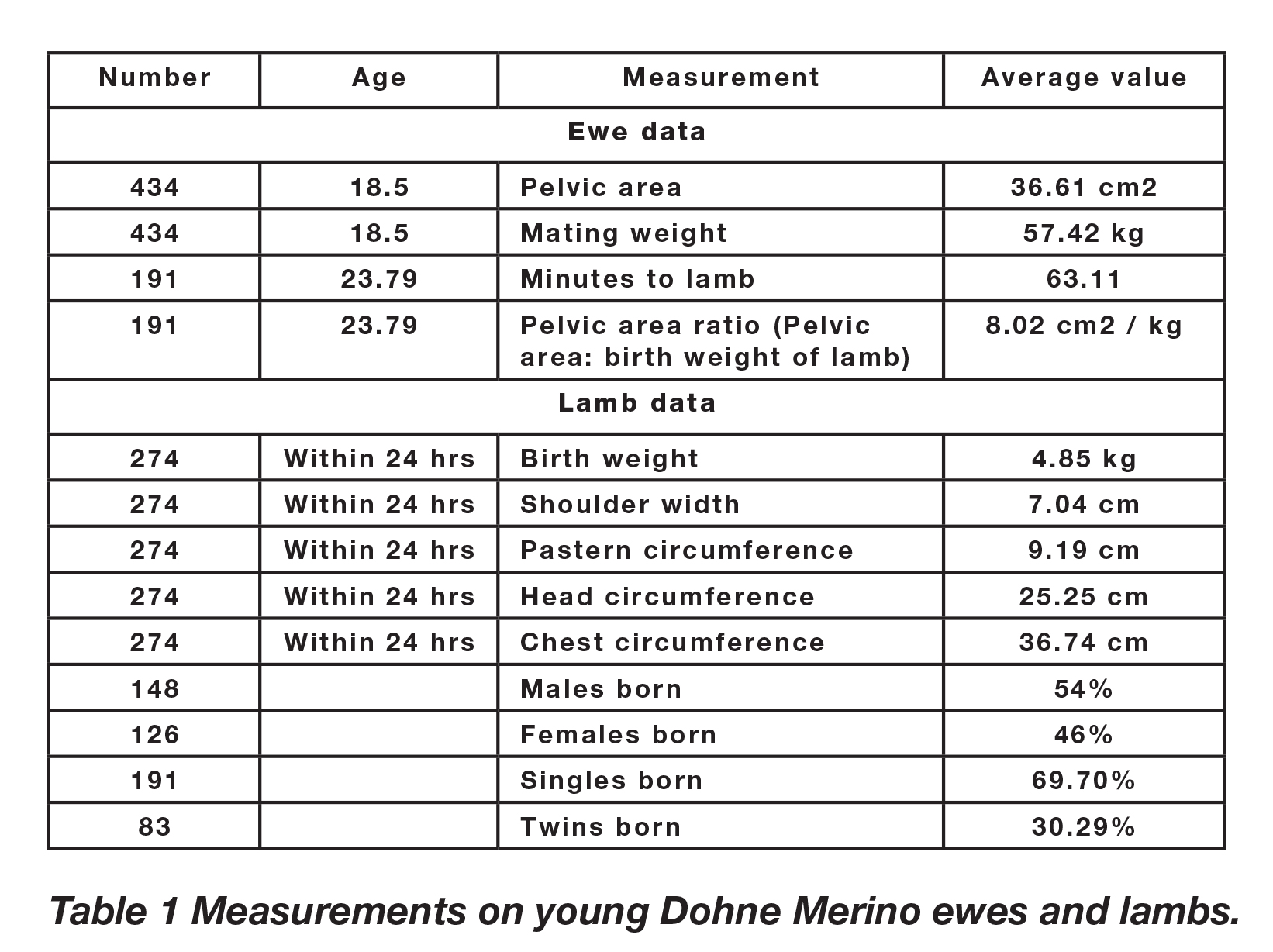 The following graphs indicate the difference between measurements on mutton sheep and Dohne Merinos. In both cases, young maiden ewes were used which were managed according to normal management practises followed for the breed. The Dohne Merino breed is usually classified as a medium to late maturing breed while mutton breeds are normally regarded as early maturing.

Graph 1 indicates the weight of the two types investigated as 53.31kg on average for mutton sheep and 57.42kg for Dohne Merinos.

According to Graph 2 the age at mating for the two types, was 9.7 months and 18.54 months respectively for mutton sheep and Dohne Merino ewes. Despite this huge age difference, both breeds were physically ready to be mated.

Graph 4 indicates birth weights of the two types as 3.7 kg for mutton sheep and 4.85 kg for Dohne Merinos. The weights were recorded within 24 hours after lambing as allowed for by specific farm operations. 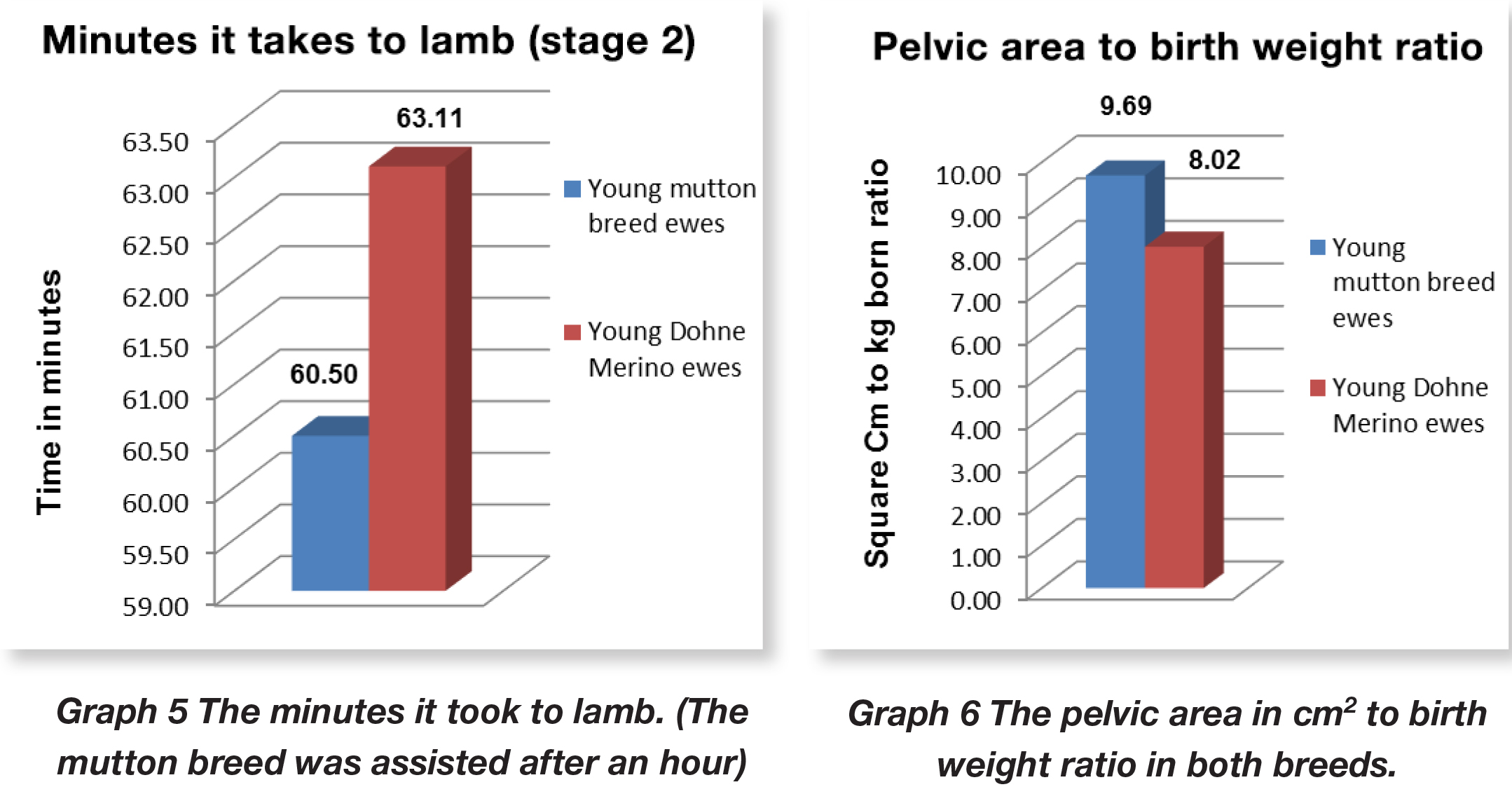 Graph 6 shows the pelvic area in cm2 to kg lamb born. In the case of Dohne Merinos, one kg of lamb was born for every 8.02 cm2 of pelvic area. As apposed to Dohne Merinos, the mutton sheep ewes had a more favourable pelvis area of 9.69 cm2 available to produce one kg lamb but still had a greater incidence of dystocia (67 percent compared to one percent).
Conclusion: The results of the study indicate that young Dohne Merino ewes have an excellent ability to lamb without any assistance. Although the mutton sheep breed has a more favourable pelvic to birth weight ratio than the Dohne Merino ewes, Dohne Merino ewes experienced lambing difficulty in only one percent of cases, whereas 67% of the mutton breed needed assistance. It is recommended that mutton breeds investigate the possibility to mate ewes at a later age possibly as is the case with Dohne Merinos, to decrease the incidence of dystocia.
Acknowledgement: The assistance and provision of ewes by Mr Wikus Bekker is appreciated.

Subscribe to our newsletter, and you could be the next winner of our monthly draw.
The prize, a copy of Birth of a Breed the Dohne Merino Story by Cameron McMaster