Economic turmoil became the hallmark of South Africa.   Despite South Africa being an agriculturally unfriendly environment at all levels, our farmers are rendering an excellent food security service. Meat and wool prices are at reasonable levels. However input costs are escalating in relation to total income. Labour costs and the productivity of available labour are having a major impact.   The effect of stock losses on account of predation and theft also proved to be devastating. The Dohne Merino, in many cases, proved to be life saving for especially commercial farmers experiencing these adverse effects.   The versatility of the breed viz. high reproduction and growth under adverse conditions as well as high quality wool to stabilize income during droughts and unexpected stock losses, proved to be invaluable.   The hardiness of the breed as well as its positioning in our economic climate, are the main reasons for the increased use of Dohne Merinos in cross breeding with specialist wool breeds, other dual purpose breeds and meat breeds alike.   It can be expected that the market for cross breeding will become progressively more important for the selling of Dohne Merino rams to the small stock industry.   Dohne Merino breeders are urged to pay more serious attention to aspects such as hardiness, meat conformation and these traits balance with high quality wool production in their breeding programmes.

1 Membership and flock size.
The number of registered studs remained contant for the past three years but it has to be noted that one of our honorary members, Prof GJ Erasmus passed away during the year. The number of registered animals (Table 1,     +2 975 animals) increased by 9 percent.   This tendency is in line with the general tendency in the stud industry of fewer studs providing breeding material to a smaller number but larger commercial enterprizes. 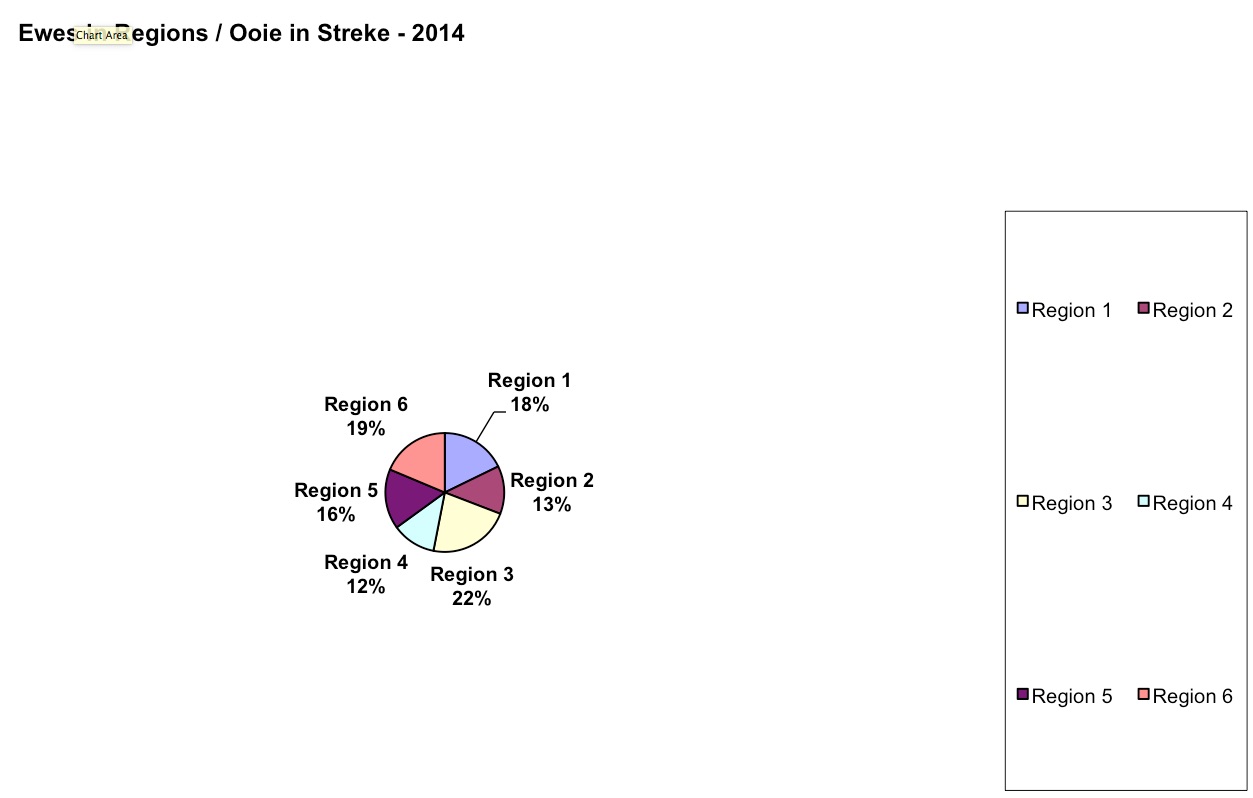 According to the pie chart above, The distribution of Dohne Merinos on a regional basis remain stable .

Table 2 indicates that the number of studs with more than 300 ewes increased dramactically by five while all other categories decreased.    The total number of studs appears to have decreased. The reason is that at the end of 2014 six studs had registered rams only.   This is an indication of new members with “upgrading” studs. Therefore it can be expected that the breed will show some growth in terms of number of animals registered and number of studs in future.   However the tendency of increasing flock size seems to have an overriding effect on the Dohne Merino stud industry as well.

2 Lambing percentage
The lambing percentage for all studs in 2014 is 142 compared to 144% (2013), 139% (2012), 138% (2011) and 141% for 2010. It is significant to note that there were more multiple born lambs than singles were registered at the breed society since 2012. Dohne Merino stud breeders must be complimented for maintaining such stable lambing percentages at such a high level.   High levels of reproduction are crucial not only to profitable small stock farming but also to genetic improvement.   The popularity of the Dohne Merino breed can to a large degree be ascribed to its inherent capability to maintain high reproductivity under the entire range of farming conditions.

Table 3 indicates the number of sheep approved expressed as a percentage of the number of lambs present at lamb inspection (100 days). Compared to 2012 a marked improvement occurred in selection intensity while breeders succeeded in making more breeding material available in terms of absolute numbers.   The selection of only 17 percent AA rams to have 165 AA rams more available, is of special significance.

The number of rams sold on all sales increased by 67 rams in 2014 compared to 2013 while at the same time the average price increased to R8 479 per ram at production sales. Although the higher prices may be an indication of the qality of rams offered on official sales as well as demand outstripping supply, breeders are warned to be sensitive to the possible negative effect of too high prices. The traditional areas for extensive small stock farming are experiencing a serious profitability crisis and may not be able to afford high priced breeding material.

The performance test figures (Table 5) reflect the same large differences between ewes and rams. The figures in Table 5 are quite stable except for WPP that decreased a little during 2013.

By including growth rate into the selection index, the opportunities were widened for breeders to follow more diverse breeding objectives that suit specific sets of farming conditions.   Breeders are however cautioned to use careful planning to maintain and improve standards regarding selection intensity and commercially purposefull selection.

The availability of vaccines such as REV 1 and blue tongue, is still hampering the bio-security aspect of stud breeding. Unfortunately no progress can be reported regarding government regulations to curb the spread of Johne’s disease.

Congratulations to the 2014 National Dohne Merino Top breeder for 2014 – Mr Michael Swart and his team members of Swarco Dohnes, Caledon. We are grateful for the special effort by sponsors of this prestigious award viz. Virbac; BKB; Voermol as well as Molatek (regional winner sponsor).

Despite providing for the 75th commemoration of the breeds existence, the financial position of the society is sound.

An inflation related adjustment to the per capita fee was made to increase rate to R16.00 per animal for 2014.

The society conducted courses at 8 different locations which were attended by 268 students. These courses remain a very efficient marketing tool and also present a platform to familiarize breeders, clients and inspectors with new technology. Publication of newsletters and the Journal continued. The importance of national and international exposure can never be under estimated.

A word of gratitude to all our breeders, sponsors, inspectors and members of all organisations in the woolled sheep industry for their continued loyal support and co-operation during 2014

For and on behalf of the council

Written by:
Kobus Delport
Posted on:
6 December 2015
Posted in:
News