South African agriculture was subject to not only economic instability but also the onslaught of a terrible drought during, particularly the latter half of 2015 in the summer rainfall areas.  Numbers of small towns experienced demoralizing water shortages and depended on underground water supplied by farmers.   The fortunes of Dohne Merino breeders were softened by the attributes of hardiness and adaptability of their flocks.  In true Dohne Merino culture, our breeders also assisted each other by donations of feed where possible.   Fortunately Dohne Merino farmers could also benefit from the increase in mutton and especially wool price on account of mainly the drop in the value of the Rand.  The inherent value of the dual purpose Dohne Merino breed also resulted in an increased demand for high quality rams.   Breeders are therefore encouraged to pay special attention to measured productivity in their breeding programs.   Prevailing conditions dictate that flock farmers are buying in less genetic material but of higher quality.

The year 2014, was also a year of celebration of the 75th year of existence of the breed.  The far-sightedness of the flock farmers around Stutterheim that laid the foundation of the breed, in this day and age, still sets the example for every breeder to follow.  Participation in the World Merino Conference was a great success and renewed international contact was made.  The Dohne exhibition, to which the Australian Dohne Merino Association contributed, attracted large numbers of visitors and meaningful discussions on various aspects of Dohne Merino management and breeding took place.

Membership of the breed increased to 97 members in 2015.  This increase can be ascribed to new F3-studs entering the breed.  It is hoped that these new studs will follow in the footsteps of many well established studs that was initiated in this manner.   Ewe numbers registered declined by 938 (2.9 percent) to 32,609.  This non-significant decline in number of ewes registered may be ascribed to current drought conditions.

According to Table 2, it is clear that three of the studs with more than 300 ewes reduced their ewe numbers to less than 300 and that simultaneously one new stud with less than 50 ewes, was established. Although these figures may indicate a degree of uncertainty in the market for rams amongst the big studs, the 8 new

members including one active member, may on the other hand indicate possible growth in the near future. 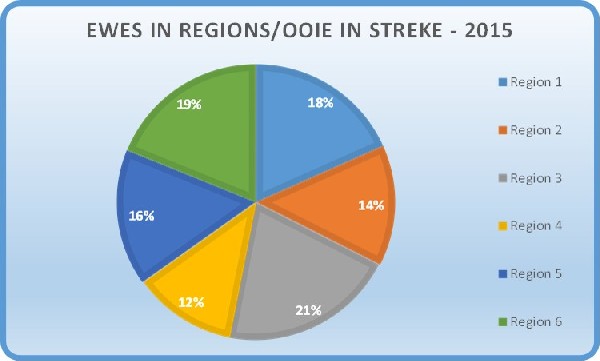 According to figure 1, Region 3 (Overberg area) is home to the largest number of stud Dohne Merinos and regions 2 (Karoo) and 4 (Western Cape and Western Karoo) remain the smallest.

4 Inspections & selection intensity
Table 4 indicates the number of sheep approved, expressed as a percentage of the number of lambs present at lamb inspection (100 days). According to the figures in Table 4 the high standard of particularly ram selection was maintained for 2015.

A total of 10235 F3 ewes were inspected during 2014 and 622 (6,1 Percent) were approved. During 2013, in comparison 8.9 percent were approved. The slight increase in number of F3 ewes inspected (640), may be an indication that the negativity regarding the introduction of F3 genetic material with lower initial breeding values, is lessening.

The number of rams sold on all sales decreased by 56 rams to 2,718 compared to the record set in 2014. Simultaneously the average price per ram decreased by R265-00 per ram to R8,386. The indication is therefore that a slight degree of consumer resistance may have developed on account of the high price levels set in 2014. Economic and generally negative physical agricultural conditions, may also have contributed to this result. According to market signals received from the main broker firms, the adverse financial situation of especially extensive livestock farmers, may well continue into 2016 and beyond.

Despite the decline of 938 ewes on record and a four percent drop in lambing percentage, 681 more weaning weights were recorded.   It can safely be inferred that complete recording of weaning weights of all breeders is now accomplished.   A worrying aspect is that some breeders lag behind in recording procedures and only supply data shortly before results are needed for the purpose of sales.   This practice jeopardizes the accuracy of breeding values across the entire breed.  Cases of changes in ranking of possible superior stud sires, were reported and we therefore call on all breeders to submit data timeously.

Performance test figures (Table 7) are quite stable compared to 2013.  The non-significant small changes may be ascribed to the effect of the drought in the inland areas.  The good conditions experienced in the winter rain fall areas most probably evened the average figures out.

The upgrading of the office computing system is well underway and once completed, an improved data flow can be expected.   Availability of vaccines may remain problematic in the short term.  After upgrading of facilities at Onderstepoort, it can be expected that the situation will improve.

The Society conducted eight courses that were attended by a total of 237 students.  Attendees included 12 breeders (flock and stud) and 19 officials and prospective inspectors as well as three South American visitors.  The Society also supported various field days and exhibitions within regions.  The high light of the year’s activities was off course the attendance of the World Merino Conference in Stellenbosch.

Outstanding service was provided by office personnel consisting of three permanent employees and two temporary workers.  The increased workload on account of the World Conference and attendance to overseas visitors posed no problem to the dedicated staff.

A special word of thanks to all our sponsors, breeders, inspectors and officials that so ably assisted in the superb treatment of our international guests.  Together with the support of various organisations in the woolled sheep industry, these too many persons to list by name, were responsible for the success achieved by the Dohne Merino Breed Society in 2015.