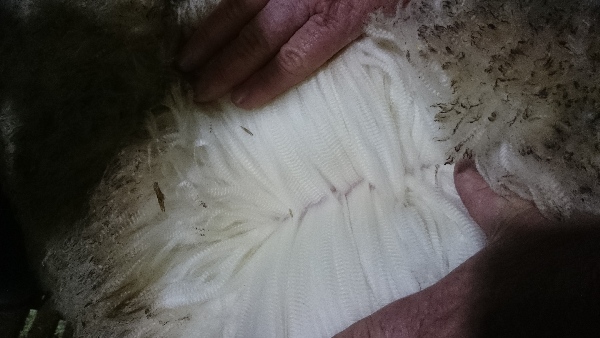 Along the tour we came across a number of  practical hints which may be of use back home.  Some of the more prominent ones are presented in this article.  The reader is directed to other articles on the website as well as our 50th year, journal for a more complete report on the actual presentations. Search the news section on our Website and also get hold of our Dohne journal  for the South African contribution 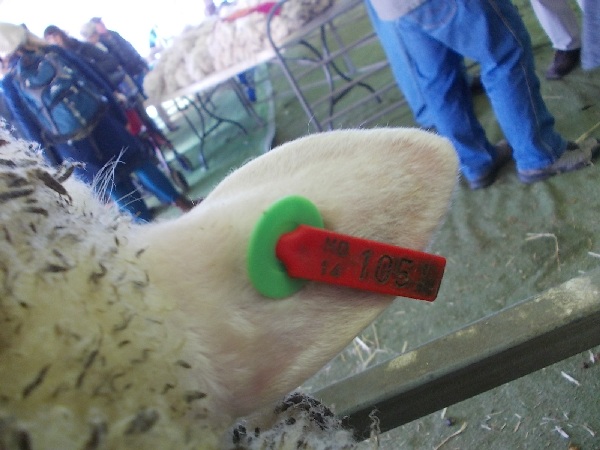 Photo : The Aussies are ingenius when it comes to gadgets to solve specific problems. This eartag was specifically designed to solve the problem of lost tags in difficult terrain by adding a plasic washer.

Incidentally a stall at the Bendigo show, advertised “cheap” re-usable electronic ear tags at 11 dollar a piece.  The reason for the drop in price was derived, as being the the state of Victoria implementing compulsory identification of all small stock for the purpose of traceability.  This affordable electronic system of identification was designed to fit to the government’s specification.   Obviously in this part of the world, private sector and government co-exist in harmony.

Photo: A mobile “dipping road train” to dip sheep on a contractual basis – One of the solutions for large scale farming without labour.  According to the advertising banner, dipping takes place on an individual sheep basis

Photo The dipping facility, photo above – Big truck with two very long trailers was too long to fit into one photo! 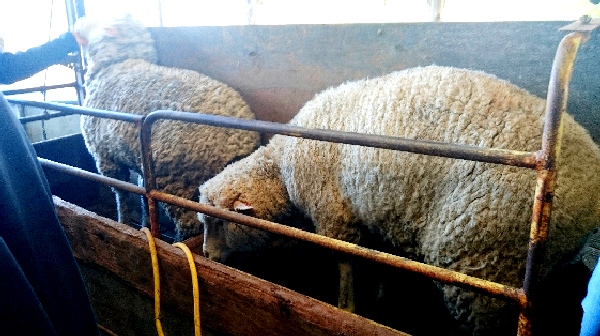 Photo: South African farmers can take note of this classing platform. This cheaply constructed wooden platform, fitting into the race, not only makes life easier for the classer by not needing to bend over, but also speeds up the process of classing with less labour needed. This particular platform, observed at Coonong Dohnes, also have a built in scale. Note the yellow cable running from the display/computing unit to the weigh bars below the platform. In this way the weight of each sheep is immediately known at classing, leading to much improved accuracy of classing. Classing at eye level under the correct lighting conditions off course also contribute to accuracy. 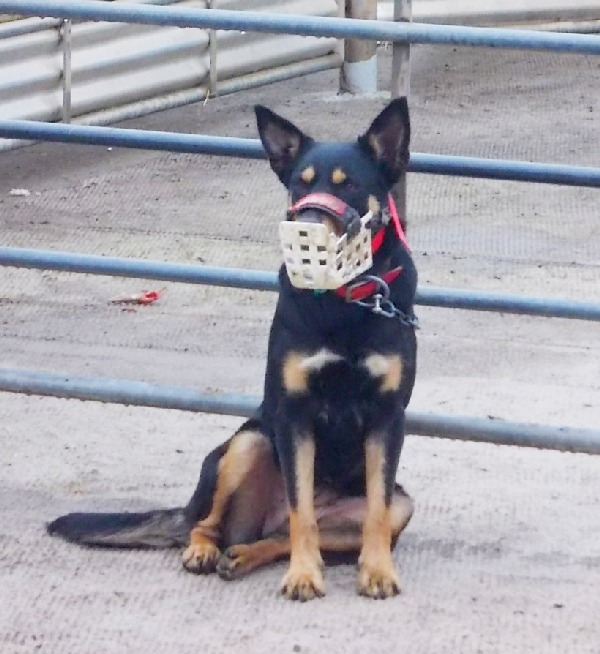 Photo: This sheep dog at the Bendigo sales yard, is only one application of sheep dogs to save labour. The dog is muzzled according to legislation, to prevent any possible harm to sheep. At this sales yard, very few labourers (I counted six) with dogs unload the sheep for sales and upload the huge trucks for dispatch. The level of skill of these extremely efficient labourers (dogs) was absolutely amazing. On farms, two way radios are used to communicate with the dogs at greater distances and poorer visibility 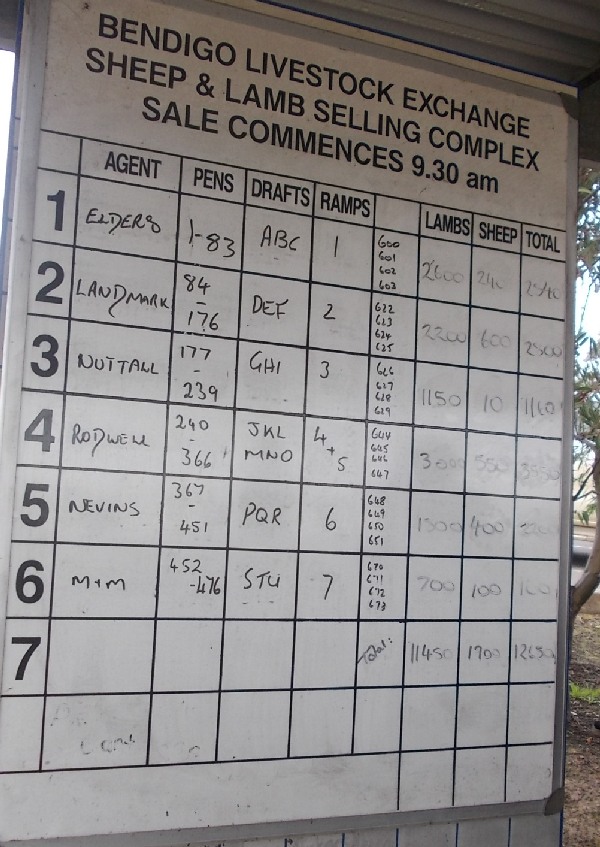 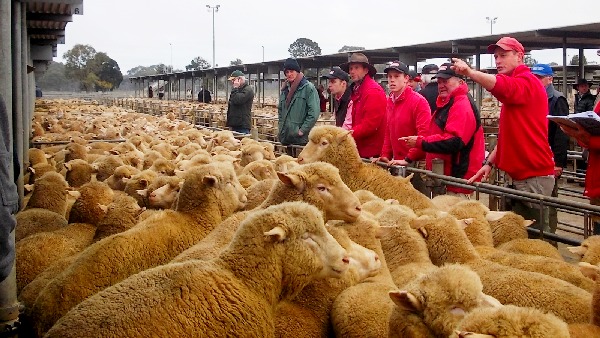 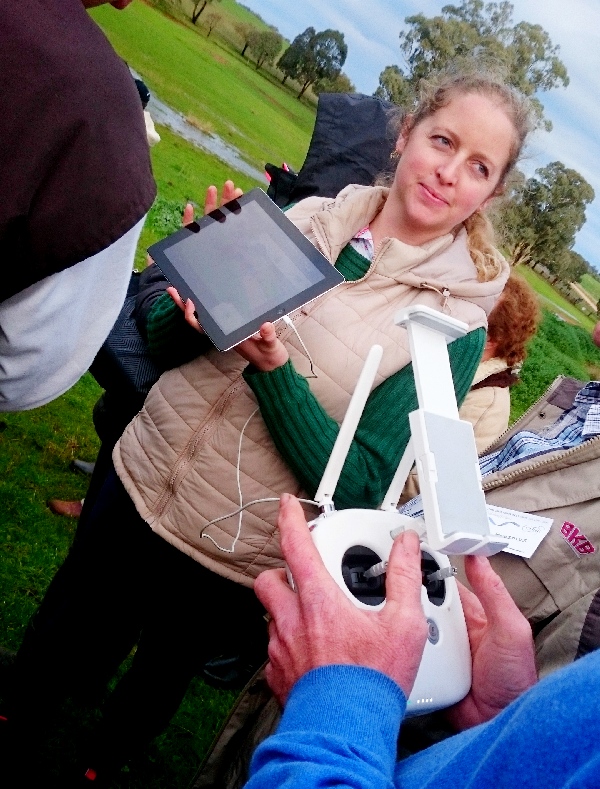 Photo:  The tour visited a sale of mainly slaughter lambs at the Bendigo livestock exchange.  At this end of season sale only approximately 13,000 animals were sold and dispatched in a couple of hours time.  According to the manager their usual work rate is to sell approximately 35,000 sheep per morning during the sales season.  In the afternoons the well designed yard is cleaned by means of high pressure hoses for the next days proceedings.  The sign in the photo indicate the different auctioneering firms’ schedules according to the numbers on sale.    Ramps for on and off loading are also allocated according to schedule to ensure an efficient workflow.  So simple but so efficient.

Photo: the  sale in progress.   It was surprising to that that so few people were responsible for so many sheep changing hands in such a short timespan.

Photo: The tour group was treated to a demonstration of different drones at Roseville park. The drones are playing an increasingly more significant role in routine inspections of camps and water points. Diseased animals are identified and drones are used to “search for sheep in difficult accessible areas.  Apart from drones, the tour impression is that Australians are also into automatic drenching and inoculating systems according to the individual weight of each animal as well as sophisticated “medicine” dispensing systems into drinking water. 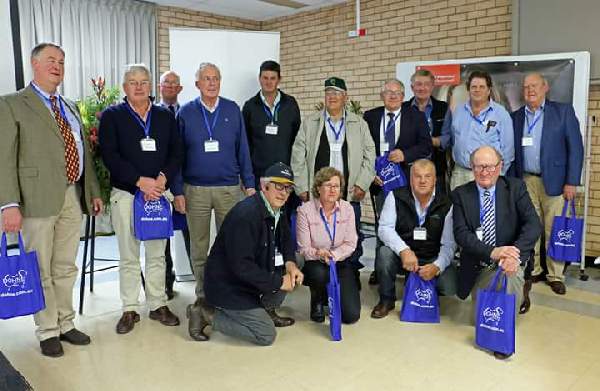 Photo the conference itself was addressed by 14 speakers on topics varying from genomics, systems applications, to marketing strategies, and industry trends 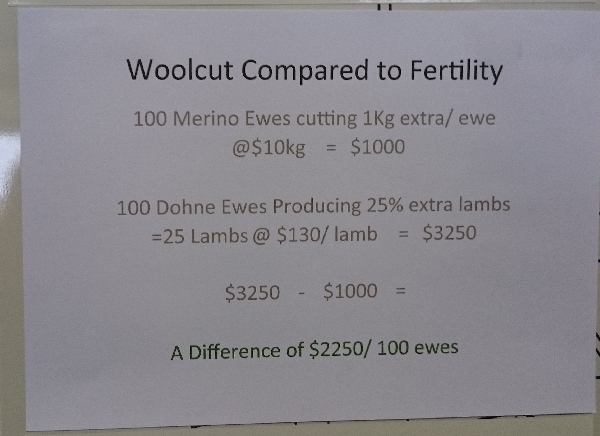 Photo: The overall impression was that the Dohne Merino, which is claimed to have a 40 percent influence on the Australian Merino industry, is extremely popular in all quarters of sheep farming in Australia. The Breed is marketed, not only as per photo, but also to improve on pure mutton production systems by means of its compliment of Merino wool combined with mothering ability. Off course it is on the other hand marketed to compliment pure wool production systems, by adding income from reproduction and growth rate. 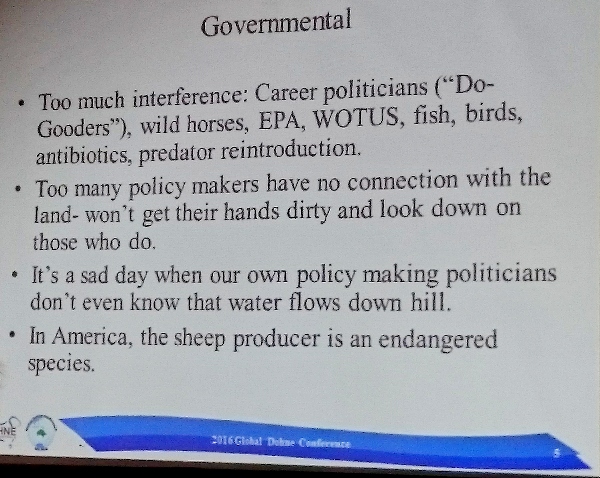 Photo: Tom Filbin, a Merino breeder from the USA added this political dimension to his description of the small stock industry in his country.
I am quite certain that a number of small stock breeders in other countries across the world, will be able to identify with Tom’s sentiments on government policy. Tom also bought the book “Birth of a Breed – The Dohne Merino story” long before the conference and also attended Cameron McMaster’s Dohne Merino course in Western Australia after the conference. 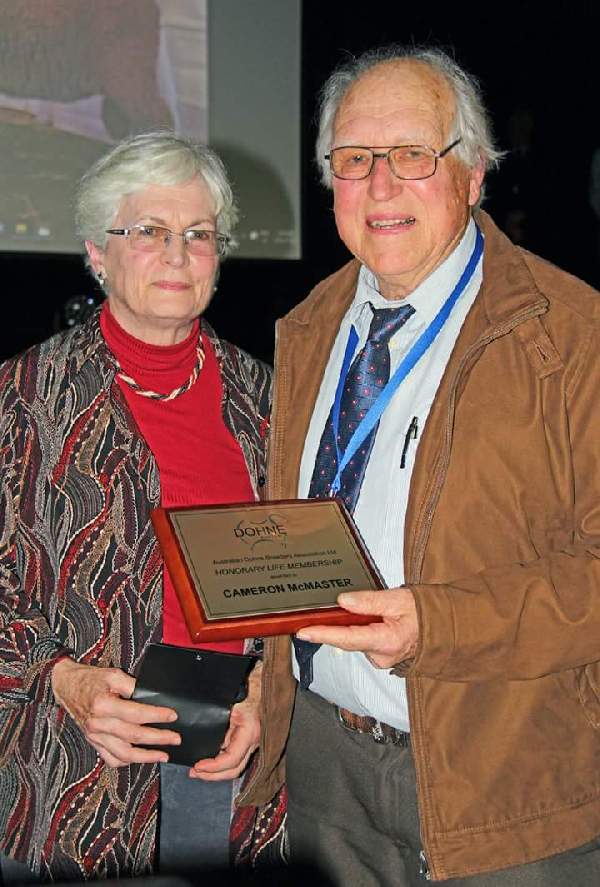 Photo: A highlight was when Cameron McMaster accompanied by his wife Rhoda, received honorary membership of the Australian Dohne Merino Association, at the conference dinner. 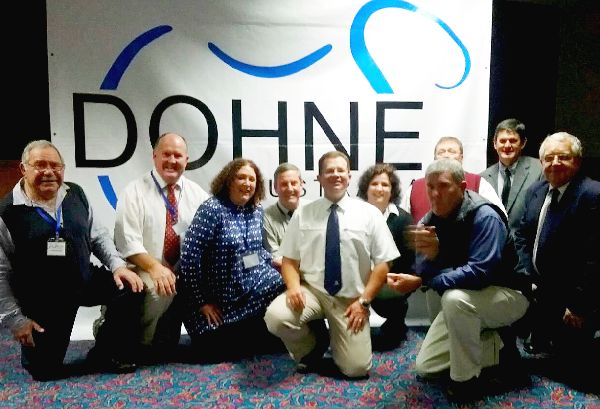 Photo: The South African contingent that attend the first Global Dohne Merino Conference.  The ADBA logo is in the background at the conference dinner. 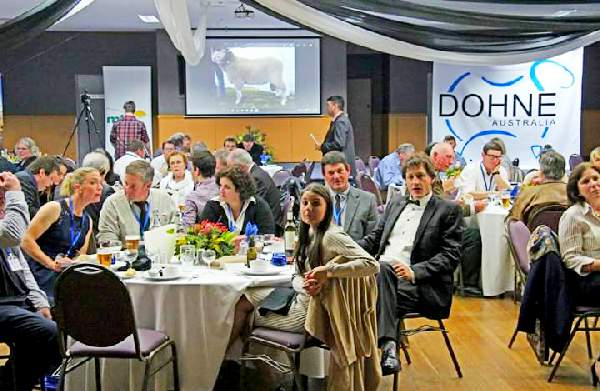 Photo: After the  conference dinner, when everybody was in relaxed mode, the National Dohne Merino sale took place.  The sale, also in evening format (same as South Africa) differed by the absence of an auctioneer’s ring with rams inside. The Australians replaced this conventional setup with a big screen on which a photo of each ram appeared together with the relevant breeding information (see photo). The rams stayed at the show grounds where they could be viewed during the course of the conference.