The year 2020 was marked by firstly a Foot-and-mouth disease outbreak followed by a Covid-19 national lockdown.  This circumstances caused the Dohne Merino Breed society to cancel the national sale 3 days before its due date.  Consequently, breeders sold the rams selected for the national sale in several ways and some were being held back for own use.  Unofficially the highest price for one of these rams was R150,000 paid by Mr. Jaco Burger for a ram bred by Mr. Dries Pienaar (White Wools Dohnes).  Some other factors, including the drop in wool price, prevailing drought etc., contributed to a lower turnover of 12.5 percent on Dohne Merino ram sales.  Considering all negative factors, our breeders were highly successful in defying this total onslaught.

The inherent value of Dohne Merino breeding material rendered the lower average prices paid for rams, as excellent value for money.  The trademark of the breed – hardiness, adaptability and consequently, versatility, once again carried the entire Dohne Merino industry during trying times.  Breeders are encouraged to concentrate on these core values of the breed when deciding on breeding policy, and when setting practical procedures to evaluate their animals

Note that the council report on breed activities during 2020 is released only at the end of 2021 to be able to reflect on complete information on 2019 born animals (now two years old).  The report provides information such as distribution of the breed across South Africa and also aspects on production and selection intensity, which proved to be valuable for making on-farm decisions by stud breeders and flock farmers alike.

Membership of the breed (96 in Table 1) decreased by 6 percent on account of six inactive studs, cancelling their membership.  However, the number of registered ewes increased by 3 percent to 35355 (table 1).  Although this slight increase may partly be ascribed to the use of the upgrading system, it may also be expected that some slight changes in stud sizes have taken place. The number of honorary members (Table 1) also remained constant at four members.  In general terms, the core of membership remains stable.

According to Table 2, some of the changes in the number of registered studs may be explained by smaller studs with less than 300 ewes leaving the society.   At the same time, some new studs

with less than 100 ewes, entered the Dohne Merino stud industry.  This part of the industry is particularly vulnerable during the period of unstable farming conditions presently experienced.  Only time will tell whether these studs made the necessary progress to secure the necessary levels of sustainability.  Council is extremely sensitive regarding these studs and will facilitate all possible assistance to these new entrants in industry.

According to figure 1, the distribution of Dohne Merinos per region changed only marginally from 2019 to 2020.  The ewe contributions by regions 1 and 2 (Eastern Cape and Karoo) increased by two percent compared to the 2019 report when a loss of one percent in ewe numbers, was reported. The number of ewes in the Southern Cape (region 3) declined by one percent consecutively to the current level of 16 percent.  The Western Cape and Western Karoo (Region 4) remain the smallest region with a ewe contribution of 11 percent.  The ewe contributions by region five (Free State) decreased by two percent, while region 6 (Eastern Free State, Mpumalanga and KZN) increased by one percent.  These slight changes in ewe numbers resulted in region 1 (Eastern Cape) now being marginally the biggest region with region 5 second biggest.  The number of registered ewes per region (varying between 3747 and 6955) is very stable compared to the situation described for 2019.  The prolonged drought in the Western Karoo, crop production and grain prices as well as mutton and wool prices are the major factors which eventually influence the composition of the national Dohne Merino stud flock.  The high degree of stability of the national Dohne Merino flock, may be regarded as a compliment to the stable core of breeders who prosper during trying times by supplying in genetic terms, arguably, the best possible woolled sheep, to the small stock industry.

Figure 1: Distribution of stud Dohne Merinos on a regional basis 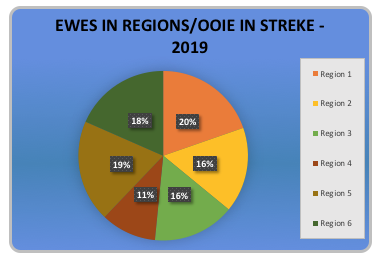 The lambing percentage for all studs in 2019 was 3 percent higher than for 2018 (Table 3).   This higher level of reproduction may be the result of applying advanced technology to counteract the negative effect of farming conditions in South Africa.  The fact that less animals were evaluated from weaning to final inspection (Table 7) may also be ascribed to breeders culling animals as early as possible to lower input costs.  It is trusted that this trend will be temporary and that Dohne Merino breeders   will abide by the principle of evaluating as many animals as possible to maximize

Table 4 indicates the number of sheep approved, expressed as a percentage of the number of lambs present at final inspection (12 months).  Note that the statistics in Table 4 are based on classing lists received at the office of the breed society during the calendar year and do not  relate to the number of animals on which measurements were taken per birth year (Table 7).  More animals (14.1 percent) were appro
ved than for 2018.  The approval percentages for both ewes and rams seem to have stabilized at approximately six percent higher compared to the period before 2017 (Table 4).  These figures may be an indication of less strict selection by stud breeders, but it may also have been caused by suds increasing their ewe numbers.  It is reassuring that the quality of rams offered for sale, remains high.

Compared to the 13 193 F3 ewes inspected during 2020 (Table 5), a total of 1207 (9.1 percent) was approved.  The approval percentage is higher than previous years because of new breeders making use of upgrading to expand their flocks.  The efficient upgrading of F3-ewes becomes critical when using proportionally less sires of perceived higher quality.  Using a few sires extensively, may lead to narrowing of the Dohne Merino gene pool and eventually higher levels of inbreeding.

The total number of 2 539 rams sold during 2020, represent a further decline of 80 rams less sold on top of the decline reported in 2019.  The average price of R10 882 represents a decline of R588 (5.1 percent) in the price for rams, which resulted in a 12.5 reduction in turnover (Table 6).  This downward trend can largely be attributed to the national lockdown experienced on account of covid-19 infections.  The trend of commercial farmers paying higher prices for top genetic material to use in their own ‘improvement programs’ continues.  Dohne Merino stud breeders are therefore required, to provide sound genetic advice to flock breeders and also to guide clients on how to manage this breeding material in a sustainable manner. 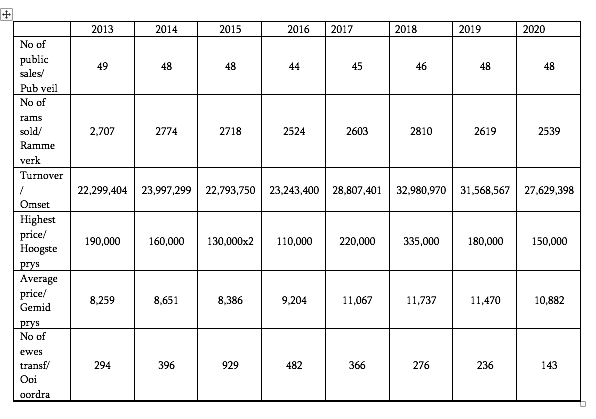 A total of 35,810, 2019 weaning weights were recorded compared to 35,274 for 2018.  In contrast a total of 22,683 animals were finally evaluated at 12 months of age.   The loss between weaning and twelve months of age, is therefore 28.7 percent.  (91227 lambs).   Although the general rule for the society is not to cull more than 20 percent lambs after 100 days, it can be accepted that some losses because of natural causes occurred and that some late submissions occurred.   Nevertheless, it is a little bit disconcerting that proportionally, less animals were finally classed compared to 2018 born animals.  Drought conditions contributed to breeders culling animals at the earliest possible opportunity.  It is however expected that the situation will normalize and that breeders will endeavor to retain as many animals as possible from each lamb drop to be finally evaluated at 12 months of age.   Following this principle, is not negotiable when attempting to affect the fastest possible rate of genetic change. 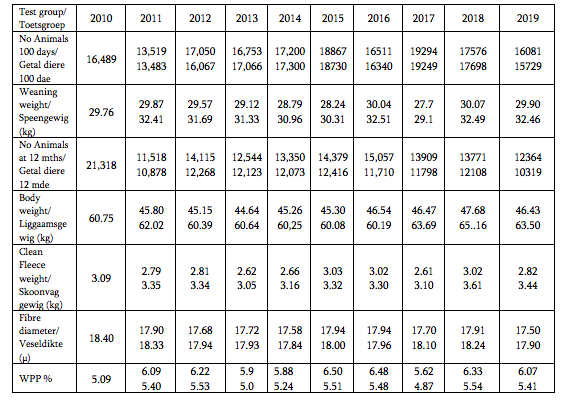 Another major concern remains that flock breeders, tend to pay higher prices for phenotypically better fed and managed rams, rather than for more functional rams with better breeding values.  In the long run, this trend will be catastrophic to both stud and flock breeders as already proven by many breeds.  The 12 months average production measurement (table 7), indicate a gradual increase in the body weights (+0.18 kg per year) relative to the change that occurred in the recorded ewes.   The changes in clean fleece weight (0.005 kg) and fibre Diameter (0.004 micron) relative to the ewes recorded, was insignificant.  Society recommends that breeders follow the commercially set, target weights for evaluating all stud animals.  The WPP% remained constant at 6.09 for ewes and 5.33 for rams.  In conclusion, except for a slight increase in the body weight of rams, production values remained constant for the period between 2010 and 2019.

b) Other technical matters

Technical discussions with studbook took place regarding changes to the mathematical model for breeding value calculation.   It became evident that significant changes in the ranking of animals will occur.  Especially weaning weight direct and weaning weight maternal breeding values will be affected.  These changes are based on sound scientific knowledge, and it will affect our breeders on a once-off basis.  It is therefore in principle justified.

The Dohne Merino Breed Society thanks our sponsors – Virbac, BKB and Voermol who over many years have sponsored this prestigious event.

The Breed Society’s finances were sound.  Investments of the society had grown at a slower pace as the result of the slump in South Africa’s economy.  Society is investigating measures to be taken to improve on current performance.

It was decided to increase the per capita fee to R24,00 to provide for the salary of the technical officer appointed.

Only one course could be presented at Stutterheim before the National Lockdown, prevented any further courses and exhibitions.

Outstanding service was provided by office personnel and the appointment of a technical officer – Me. Ashley van Niekerk promised to assist in rendering a broader spectrum of services.  Unfortunately, Me. van Niekerk resigned after six months of service on account of personal Covid-19 related reasons.

The support of all the various organizations in the woolled sheep industry, who were responsible for the success achieved by the Dohne Merino Breed Society is acknowledged with special gratitude. A special word of thanks to all our sponsors, breeders and inspectors who are vital to the efficient and continued service of the breed to the small stock industry.