Dohne Merino sheep became internationally more popular and as a result more research is performed on Dohne Merinos.  Apart from regular research at the major research institutions in Australia, the Free State university is establishing a Dohne Merino research flock and several research institutions in South America do research on the breed.  In this article results of a cross breeding experiment in South America as well as research on the reproduction in the South African stud Dohne Merino population will be discussed.  Both aspects are important in terms of breeding policy in general and also when pursuing commercially viable objectives.

Cross breeding with Dohnes in Uruguay

The Dohne Merino breed society came across an Abstract of research on Dohne Merinos completed in Uruguay.   This research as well as that by some other scientists, broadens the perspective on the breed.  The reported research ( In Animal production science) entailed crossing Dohne Merinos with Corriedale sheep to study the effect on production and reproduction.  This positive outcome for the Dohne Merino breed indicates the breed’s intrinsic  value in crossbreeding systems.  More recently Dr Piet Swiegers confirmed these findings under South African conditions.  A complete report on the South African findings will soon be published on this website.

The Uruguayan research, clearly points to the Dohne Merino  impacting  on wool quality without any detrimental effect on meat production.   Dohne Merinos traditionally offers the choice of a self replacing dual purpose breed without the need for crossbreeding to small stock farmers.   In contrast, crossbreeding complicates a production systems because of  possible contamination of the wool clip by pigmented fibres, kemp and also replacement of ewes.  Clear identification of crossbred progeny sometimes led to the failure of such systems.  Despite complications, crossbreeding remains popular for various other reasons.  Dohne Merino breeders should therefore this possibility which may potentially increase income from commercial enterprises and also indirectly studs.

The national reproduction data set of  Stud Dohne Merinos in South Africa (analyzed by Dr JJ Olivier and Dr GJ Delport) was presented at the first World Dohne Merino conference, 2016, held in Australia.  The data used was selected from the national Dohne Merino database to represent the two extreme groups of animals in the stud industry  regarding  management and reproduction, namely:  completely extensive farming without the use of artificial  reproduction techniques and the second group of animals totally intensively managed with the use of PMS-treatment, synchronization, lambing pens etc.  It constituted approximately 50 percent of the available data after omitting  all data from breeders who followed semi-intensive strategies or  who changed their strategy from intensive to extensive or vice versa. One finding of special importance from this work was that fecundity at first lambing was associated with higher lifetime reproductive performance.

The data above, was re-analyzed under leadership of Prof Schalk Cloete, university of Stellenbosch and presented at the AABG conference in Australia during 2021.  This analysis concentrated on number of lambs born per ewe lambed  (NLB), interpreted as fecundity or litter size), number of lambs weaned (NLW) and also ewe rearing ability (ERA), a trait derived from NLB and NLW.

The results indicated a mean of 1.49 for number of lambs born (NLB) in intensive farming systems and 1.28 NLB in extensive farming.  This relative small difference of 21 percent can be considered to be proof of the overall versatility of the breed.  The level of reproduction under extensive conditions (128 percent) indicates a high level of hardiness which is possibly the result of maintaining the optimum balance between wool production and meat production (physiological fitness).  When comparing number of lams weaned under intensive conditions (1.32) with number of lambs born also under intensive conditions, a loss of 17 percent lambs occurred.  In contrast number of lambs weaned under extensive conditions (1.19) indicate a lamb loss of only 9 percent.   This evidently greater losses which occurred in greater litter sizes, is in line with research in Australia and elsewhere.  Breeders are therefore advised to carefully consider all aspects of reproduction when deciding on management strategies to be followed.  Interestingly, a small but insignificant  difference of only 0.038 occurred in ERA.

It is also of importance to note that the heritabilities of these traits are below 5 percent with ERA the lowest at 1.2 percent.  It is trusted that genomic selection will assist in accerating genetic change to more acceptable levels.

For your convenience and further reading, the abstract and reference is included below 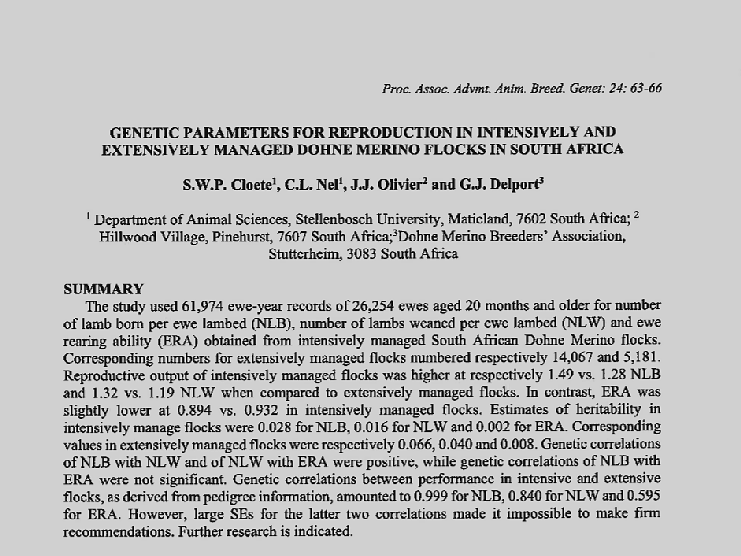