At the National sale of the Dohne Merino Breed Society of South Africa on the 21st February a new world record price of R335 000 for a ram was achieved. The ram of Mrrs. Frans and Andries Marx was sold to a sindicate of four top South African Dohne Merino Breeders.   These breeders include Mr. Clark Rattray, Swartberg, Kzn, Mr Dries Pienaar, Molteno, Mr. Julius Beukes, LadiSmith, KZN and Mr At Liebenberg, Kroonstad, Freestate.  The remarkably successful sale was marked by a provisional average of R45 222 (also a record) for 45 rams sold.  The six top priced rams realized a turnover of approximately one million South African Rand.  Other great achievements include Dries Pienaar’s White Wools stud which sold four rams at an average price of R77 500; Kromspruit Dohnes (Mrrs. Mark and Freddy Schmidt) with 3 rams at an average price of R54 333; Vlakkloof Dohnes that sold 3 rams at an average price of R49 333;  Mr.  Boeta Wessels with an average price of R 46 500 (6 rams), Mr Clark Rattray with an average of R45 500 for four rams.   Mr Frans and Andries Marx’s most outstanding achievement of two rams sold at an astounding average price of R180 000 tops this list!   The Dohne Merino Breed Society salute its top breeders for the one of  a kind presentation of breeding material not to be easily equalled.  The balance between meat production and wool production traits of all the rams offered for sale, proved to be exactly in line with what the current market demand.  The exceptional quality of the rams at this sale were a true reflection of the highest standards of Dohne Breeders set to meet the requirements of sustainable commercial woolled sheep farming in South Africa. 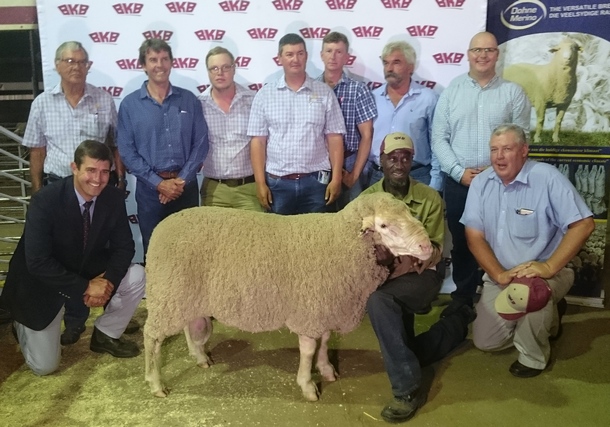