Ockie was born and grew up in the de Rust area. His Family already made huge in roads in agriculture and co-operative milieu during the 1950’s and 1960’s.  He matriculated at “Boys high Oudtshoorn” and eventually ended up as “RSM” as the result of his Military training. His plan to complete a B-Com degree was cut short by the ill health of his father.  He had to take over the family’s mixed farming enterprise. 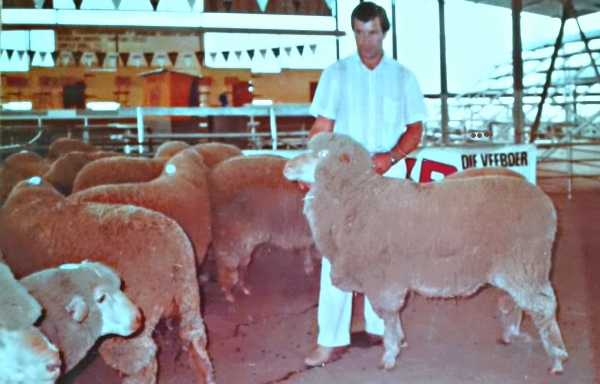 During the drought of the 1960’s,  Ockie was forced off the farm and completed an agricultural diploma at Glen Agricultural College under the leadership of “Brother Steyn” – a stalwart in the Sheep and Wool Industry.  Hereafter he joined BSB at Burgersdorp with Uncle Five du Plessis and Dolf Botha as colleagues (except on the rugby field).  Ockie experienced all the turmoil of the amalgamation of BSB and WGA as well as the formation of SAWA.

Ockie landed in Humansdorp at the time of implementation of the then “new”  wool marketing scheme.  His competition included Mr. Jimmy Maritz, also a legend in the wool industry , employed by F.C.U at that point in time.  Ockie also experienced the formation of BKB out of the existing structures in the industry.

An incident during a sheep judging course, convinced Ockie of the value of the system central to the success of the Dohne Merino.  Apparently the  incident included the following conversation in Afrikaans:   “Uncle Fred” asked “maar kan jy nie SIEN nie.”  Ockie then asked ” maar wat moet ek SIEN.” The question was never answered.  the Dohne system developed in cooperation with the then Department of Agriculture to make use of  measuring traits of economic importance and thereafter to process data into useful comparative figures, provided a new more efficient tool to Ockie (“who cannot see” according to the archaic subjective show judgement system.

Commencement of wool testing in 1974-1976 indicated that Dohne wool is slightly (± 5%) over crimped  but also that between 20/21 Mic with a 19% C.V., it can be classified as good quality Merino wool. This convinced Ockie to market the Dohne-system. He was so enthusiastic that he became the Dux student on one of Cameron McMaster’s first courses.  He was also privileged to judge the last Dohne show at Goodwood together with Ian Stewart in 1977.  Afterwards Ockie acted for 21 years as vice-president of the Humansdorp show and was also instrumental in staging the National show of the Caffrarian Polled Merino Society at Humansdorp in 1978.

Ockie completed the Walrich breed society’s course in 1980, also as Dux student.  During the course he asked the question: “Wat is die verskil tussen Walrich en Kaffrarain Poll Merino?”.  This sparked off serious debating ending in sheep of the two breeds physically being compared in one “kraal”.  The eventual outcome was that the Walrich society amalgamated first with the Caffrarian Polled society and thereafter with the Dohne Merino Society. The Humansdorp area accepted 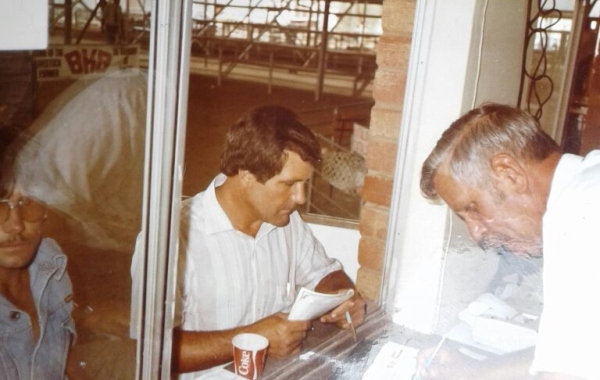 the Dohne to such an extent that this area bought 37% of the rams on the Bloemfontein sale in 1978.  During that period legendary studs were founded in the area.  We think about the “Lawn-stud”, (Tom Dicey) and “ Lighuis-stud” (Andre vd Merwe).  They were sold as the result of illness and emigration to Australia.  In 1987, Humansdorp area produced approximately 1 Million kg wool.  On account of theft after 1992 and expansion of dairy farming sheep farming stagnated.  Ockie is however of opinion that new technology including sophisticated planting methods, are empowering farmers to plant new grazing and stimulate production. The Dohne merino clip of Humansdorp (95% plus of the total) is known for the high quality short wool produced for the past 30 years.

Ockie concludes by mentioning that he made many wonderful friends and that you will find nowhere else such loyal clients and friendly community.  He ended by wishing Wouter Vorster, his successor a bright future in the area  and be assured: “Kyk op na bo vanwaar al jou hulp vandaan sal kom”. 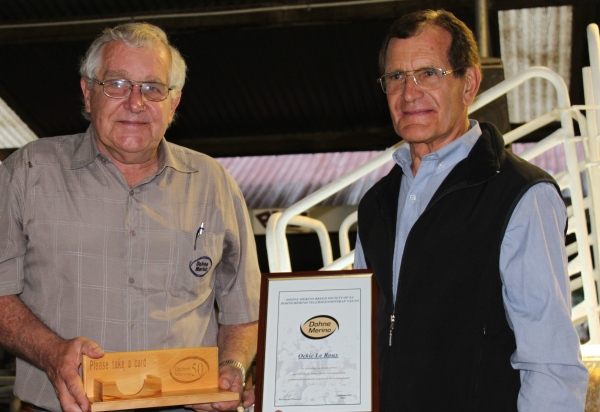 Photo : Ockie le Roux receives a certificate and token of appreciation for the role he played in the development of the Dohne Merino breed