The Dohne is a true dual-purpose breed option capable of performing in a variety of environments. The use of objective testing programs and a focus on the major factors driving profit, performance and efficiencies within sheep enterprises, has seen the breed increase in number and importance in recent years. Continued improvements in wool and sheep meat returns ensure that the Dohne will remain a major contributor to the maternal ewe base nationally.

INTRODUCTION
The introduction of Dohne genetics into Australia in 1998 coincided with significant changes in breeding objectives and productivity within the Australian sheep industry. Persistent low wool returns and a continued growth in export access and demand for sheep meat products saw an increasing emphasis placed on sheep productivity, on-farm and breeding efficiencies, sheep meat production and, importantly, cost of production considerations.

Over the past 2 decades we have seen an ever-growing focus on improving fertility, fecundity, lamb survival and growth rates, resilience of the breeding ewe base, increased focus on animal health and welfare practice, selection based on a sire/breeds genetic merit and the cost/benefit of sheep meat and wool production. These issues, combined with a declining national flock/breeding ewe base, and a greater focus on dual-purpose and/or composite breeds and crosses has seen an increased interest and accelerated use of Dohne genetics nationally.

So what is the role of the Dohne? To answer this question, we need to look at tangible, repeatable benefits the breed offers, ignoring hearsay and public hype.

Market Forces. We have witnessed the continued decline in national sheep numbers (-41%) and wool production (-50%) since 1998/99 as illustrated in Table 1. Improvements in wool values (237%) during this period (driven by diminishing supply, improvements in demand and concerted marketing campaigns), has been a welcomed directional change.
Table 1:National flock, wool production, sheep meat values and respective percentage change for the period 1998/99 to 2015/16 (Source: NLRS, ABARE, MLA)

Since 1998/99 however wool category premiums have constricted and the median micron average nationally has shifted slightly higher to sit around 20 microns. The improvements in ‘bread and butter’ 19 to 21-micron wool returns has meant that the Dohne has been increasingly competitive against finer categories. Sheep meat returns have also shown a strong upward movement since 1998/99 as shown in Table 1 and Figure 1 below. Driven by strong export demand, sheep meat remains the primary profit driver with Australia’s sheep industries gross value of production – now estimated as 60:40 for meat (slaughter lambs, mutton, surplus ewe sales) and wool (ABARE 2015) across all sheep-based enterprises nationally. Dohnes, as a true dual-purpose breed, are therefore increasingly well positioned to benefit from improvements in sheep meat, breeding ewe and wool receipts. 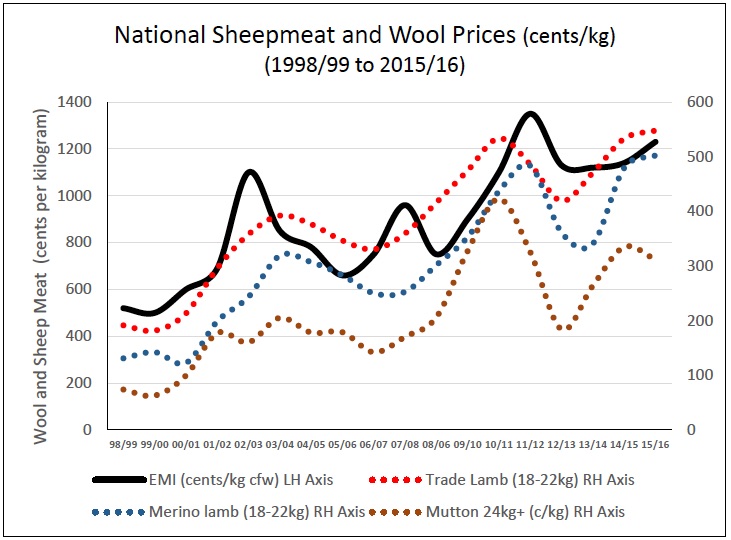 Interestingly the average skin values for merino-style wools have averaged more than crossbred sucker (+$4.99) or older lamb skins (+$5.90) over the past 2 decades, with differences of between $10 to $14 in 2015-2016 in line with improvements in wool prices (Figure 2). As a result gross returns for Dohne lambs are generally greater than Merino lambs and/or on par or above gross prime lamb returns based on the combined carcass and skin values. 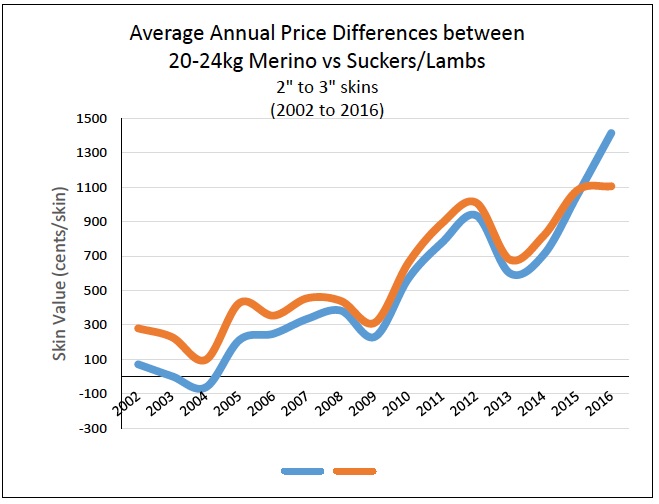 Trait Selection and Emphasis. The Australian Dohne Breeders Association (ADBA) has overseen the continued use of performance testing and pedigree recording for commercially relevant traits since the breeds inception. Having all registered studs undertake stringent objective measurement has not only been a major driver behind the continued improvement of the Dohne breed nationally; but has also provided commercial producers with confidence when sourcing Dohne genetics.
Genetic gain in major wool and carcass traits since 2005 for the Dohne are shown below in Figures 3 and 4.

An increase in clean fleece weight (CFW) has major implications for on-farm productivity and income share with selection for ‘high CFW’ negatively impacting on the rate of survival of lambs to weaning (Hatcher and Atkins 2006). This may, in part, explain why historical Merino weaning percentages have remained well below potential lamb numbers based on scanning data.

While Dohne CFW genetic gain has linearly improving; (Figure 3) the selection emphasis on this trait has been relatively low so as to reduce the risk of correlated trait ‘blow-out’ (increased body weight, fibre diameter, fibre CV values, wrinkle score and a decline in genetic fat and reproduction efficiency). 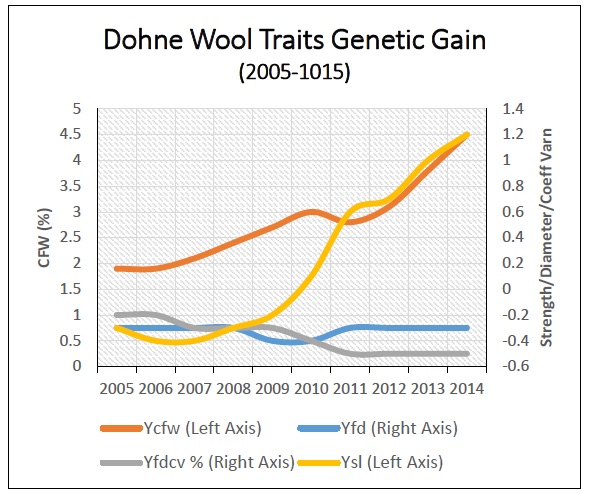 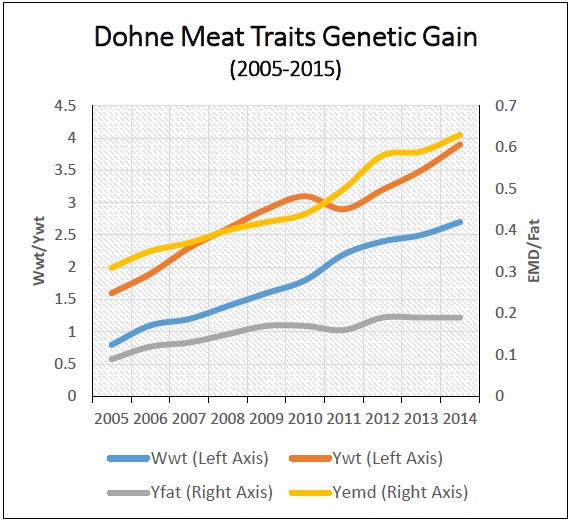 Drummond (2015) suggests that it is possible to improve productivity by 14% over a ewe’s lifetime when able to be mated as a ewe lamb. Growth rate is a critical driver in terms of a breeds’ ability to successfully join at younger ages and is a major trait focus within Dohne performance testing programs. Balancing the relative emphasis placed on both carcass and wool traits is critical for maintaining the Dohnes dual-purpose nature. Thankfully this has continued to be the case within the breed nationally.

Efficiency/Resilience. The Australian sheep industry, regardless of breed or enterprise mix, are increasingly focusing on improving ewe efficiency and resilience. Efficiency can be measured as kilogram of product against mature ewe live weight/ha/DSE/100mm rainfall etc. Regardless of the measure used, increasing efficiencies are critical given our ever diminishing breeding ewe base and rising production costs. Resilience, or “a ewes ability to ‘bounce’ back and/or perform under periods of nutritional stress” is a major factor contributing to ewe efficiency.

The Dohne potentially offers improved fecundity, fertility, mothering ability, growth rate to weaning and an ability to perform in a range of environments (including pastoral areas). Improvements in weaning rates, driven principally through increased twin lamb survival, are a critical profit driver and a means for reducing costs/kg of product produced.

The dual-purpose self-replacing nature and use of performance recording of commercially relevant traits of the Australian Dohnes lends itself to
• capitalizing on short to long-term changes in wool/sheep meat and breeding ewe values
• use as both a terminal and maternal sire
• increasing the national breeding ewe base
• retention of on-farm quality assurance status
• improvements in lamb survival, growth rates, wool and meat production efficiencies
• improvements in ewe efficiency and resilience
• increased speed of genetic gain for replacement breeders (reduced generation interval, earlier mating of ewe progeny) and
• reduced costs of production/improved benefit/cost ratios and therefore plays an increasingly important role within the Australian Sheep Industry.