Since its inception the aim of the Dohne Merino has been well defined with the breeding objective to improve meat, wool and reproductive traits. In comparison, Fine Wool enterprises have focused on just wool in the past, and similarly, prime lamb enterprises have tended to focus just on meat and reproduction. This analysis modelled the Dohne, Fine wool Merinos and a crossbred Prime Lamb enterprise run in three different environments and found the Dohne Merino is more profitable based on the last 10 year prices whether it is being run in high, medium or low rainfall environments. It would appear that the adoption of objective measurement and modern breeding tools has meant that the breed’s objective has been well implemented over the last 50 years.

The Dohne sheep presents a very different alternative to sheep producers than previously available sheep genetics in Australia. With emphasis on both meat and wool traits, it presents the potential to have a true dual purpose sheep, which provides an alternative to the fine or medium wool Merinos and specialist prime lamb breeds or composites that have been traditionally used in sheep enterprises. The latter generally have very broad wool with little value and focus purely on high reproductive rates and high lamb growth rates to enable high meat production per ewe. The former generally focus on wool
production traits, such as fibre diameter and wool cut. There are other dual purpose breeds, but their wool tends to be broad and of lower value. While a few hundred sheep measurements are likely to yield statistically significant differences between breeds for wool cut, bodyweight and fibre diameter, due to the volatile nature of the trait, the number of sheep measurements to determine statistically significant differences in reproductive rates is
very large.

INTRODUCTION
This author is unware of any breed comparison run with appropriate numbers to determine real differences between these breed types over a number of seasons undertaken in Australia. Therefore the sheep industry must either depend on South African based comparisons or computer modelling of these different breed types. The environment around the Cape region of South Africa is similar to southern, temperate Australia in terms of rainfall and timing of that rainfall, but nevertheless; it is different, with different soil types and pastures. It is also possible that their Merino sheep are different too. Thus, it is logical to seek appropriate ways of modelling Dohne performance to provide a realistic comparison of breed performance in the absence of realistic alternative comparisons.

MATERIALS AND METHODS
GrassGro® is a CSIRO developed computer program that models the returns and productivity of different sheep and beef cattle enterprises over the long term. It uses soil, weather data, financial data and animal production traits to simulate a grazing system. GrassGro® calculates animal production and subsequent financial performance for each year and presents the average for the simulated period as well as the variation in results over the simulated period. GrassGro® has been validated numerous
times in different Australian locations (Donnelly et al. 2002).

GrassGro® was used to model a Merino fine wool flock along with a Crossbred prime lamb flock, as well as a Dohne flock for the period from 1965 to 2015. There are published differences between medium wool Merino and Dohne sheep (Cloete and Cloete 2015) from South Africa, and these results fall in line for wool and bodyweight traits with other trials such smaller trials undertaken in Australia with predominantly F2 Dohnes, (Ransom et al 2015). Other trials have shown a higher reproductive rate in the Dohne and this is summarized by Graham and White (2005), who put the Dohne reproductive rate 17% better than a fine wool Merino.

In this modelling exercise, GrassGro® simulated the breed reproductive rates, while the wool and bodyweight characteristics were taken from Cloete and Cloete (2015) and entered into GrassGro. Bodyweight was 20% higher than a fine wool Merino, with wool cut 10% less and fibre diameter about 1.9 μ broader. A specialist fine wool strain was chosen over a medium wool strain as a fine wool strain is more likely to be the choice nowadays through most sheep raising districts, although it may not be the obvious choice in lower rainfall environments. The characteristics of the fine wool flock and the prime lamb flock was largely based on the DEDJTR Livestock Monitor Farm Project over recent years (Blackshaw and Ough 2015), with the Dohne production characteristics adjusted as described above. Thus the fibre diameter of the Dohne was 2.9 μ broader than the Fine wool strain.

Prices were based on real (inflated adjusted) prices for wool based on weekly AWEX quotes for the last 10 years to reflect the normal variation in economic activity that impacts on the demand for wool. There was no wool stockpile sales in this 10 year period so that abnormal supply was not detrimentally affecting prices, something that would not be anticipated to occur in the future. Meat prices were based on the last 10 year real (inflation adjusted) meat prices as quoted by MLA. This period was chosen so that the substantial sell off of the Australian sheep flock prior to and culminating in the 2006/07 drought did not skew meat prices down abnormally. Again, it would not be anticipated to see a major sell off of sheep numbers in the future that might depress meat prices. Current wool and meat prices as of July 2016 are significantly higher than these long term averages, thus they should result in even high profitability than forecast for all three enterprises.

The simulations were based on the three flocks grazing highly improved and fertilized perennial ryegrass and sub clover pastures at Hamilton VIC, phalaris and sub clover pasture at Kybybolite SA and an annual grass and medic pasture at Roseworthy SA. These three locations were chosen to provide a comparison of performance at higher rainfall (approximately 685 mm, 525 mm, and 490 mm respectively. The stocking rates are consistent with the optimum stocked plots of the Long Term Phosphate Stocking Rate trial run at the Victorian DEDJTR Research Centre (Cayley et al 1999) and other stocking rate trials (Saul and Kearney 2002). This level of stocking rate and fertilizer was chosen to reflect “best practice” in this location and was extended to the Kybybolite and Roseworthy locations. This stocking rate is comparable to that achieved by the some of the top farms of the Victorian DEDJTR Livestock Farm Monitor Project given similar rainfall (Blackshaw P. and Ough, M. 2015). The main issue with the Roseworthy site is that GrassGro doesn’t take into account other farm feed sources, such as stubble, which can be significant in these lower rainfall locations.

RESULTS AND DISCUSSION
The different breed systems resulted in different reproductive rates, with the lambing marking percentage in the Fine wool Merino averaging 77%, the Dohne at 94% and the Crossbred ewe enterprise at 115% at Hamilton. This is in line with farm benchmarking results and industry experience (Blackshaw P. and Ough, M. 2015). Given the size of the Dohne ewe, the fact that it started out at a stabilized cross between a medium Merino sheep and the SAMM; and that genetic selection has been applied to improve reproductive rate further over 50 years, it would have been surprising to find that the Dohne reproductive rate was not higher than the Merino. There are more sheep run per hectare in the Finewool flock than the Dohne flock, and in turn than the Crossbred flock due to differences in mature sheep size and lambing time. For example, the Dohne and Crossbred ewes lambed earlier than the Merino ewe so that their lambs could be finished. However, they were all stocked at similar dse levels and pasture availability was similar across the three different simulations.

The Fine Wool flock ran ewes and wethers, whereas the Dohne and Crossbred flock had ewes joined to terminal sires and in the case of the Dohne flock, enough were joined back to the Dohne to enable the flock was self-replacing over the 50 years of the simulation. Table 1 outlines some key financial output from the three sheep production systems at the high rainfall location, Hamilton VIC. The Dohne is the most profitable, but the Fine wool Merino has the least variable gross margin due to the reliance on wool income, rather than meat income, which is more variable as it is highly dependent on seasonal conditions. On the other hand, the Crossbred prime lamb enterprise, which is far more dependent on meat income is more variable in gross margin returns than the Merino and the Dohne enterprises. Further it is the least profitable on this analysis.

This analysis does not take into account: –
• Variation in commodity prices from year to year. For example, wool traditionally has been the most volatile of commodities, however over recent years it has been more stable.
• Environmental impacts other than rainfall, such as very wet soil conditions.
• Differences in labour input with different enterprises.
• The impact of easy care sheep, such as the Dohne or prime lamb breeds on labour costs.
• Overhead costs or interest. A gross margin has been developed, but that is not necessarily profit as labour and overhead costs should be taken into account. The capital values of the three enterprises are different too.

These factors can be significant and will vary from farm to farm. For example, farm benchmarking performance highlights that there is a large variation in performance level within each farm enterprise that is usually of greater magnitude than the difference between enterprises.

The gross margin performance over the three sheep enterprises in the three different locations is summarized in Figure 1. The Dohne is the most profitable in all three locations, with the order of the enterprises unchanged depending on the location. The profitability of the low rainfall site at Roseworthy SA is reduced due to heavy supplementary feeding due to time of lambing, which in actual fact is likely to be largely supplied at no direct cost from stubbles in this location. At the medium rainfall site all three enterprises benefited from higher lambing percentages due to better survival rates. Thus benefiting the Prime lamb enterprise.

The Dohne sheep perform well in this analysis, which is not surprising given their dual purpose nature and the high prices that have been on offer for meat and wool over the last 10 years. It is in line with results from previous analyses that have been undertaken by this author and also to an extent with Graham and White (2005), whose analysis predates recent higher wool and meat prices. Of course, like any enterprise, poor management or animal health issues could easily erode these advantages, so to realize this potential good management inputs are required, just as it would be with the other enterprises. Further, breed averages have been analysed in this paper. Individual flocks could have better genetics in either of these three breeds, which will change the financial outcome significantly. 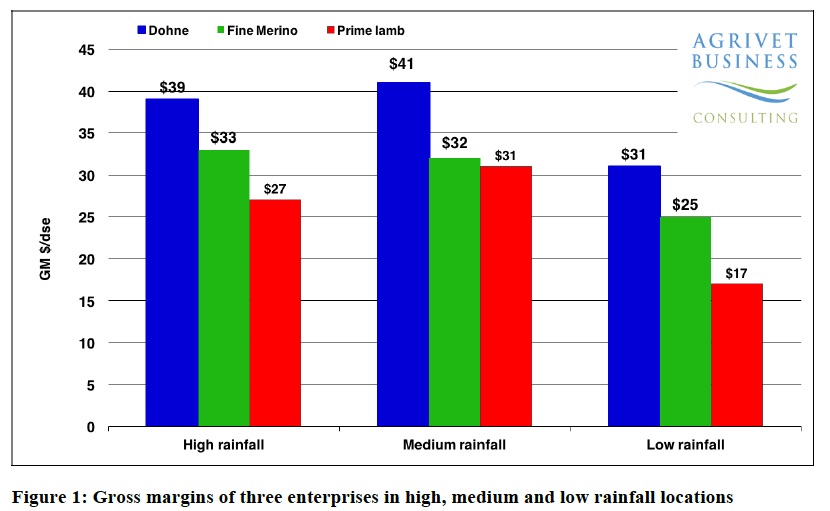 The Fine Wool enterprise has least production risk, hence translating into less business risk in this analysis. As noted previously, in reality commodity price risk would need to be taken into account too. The prime lamb enterprise has considerably more risk due to more reliance on seasonal variation to drive production and hence financial results. The Dohne being more diversified into meat and wool, is not so exposed to seasonal factors, while being more profitable.

In conclusion, it would appear that the Dohne does stack up well financially and its performance is testament to clearly stated breeding objective and achieving that through the efficient implementation of modern genetics tools.

Cayley J.W.D. et al. The long-term influence of superphosphate and stocking rate on the production of spring-lambing Merino sheep in the high rainfall zone of southern Australia (1999) Australian Journal of Experimental Agriculture 50: 1179–1190.