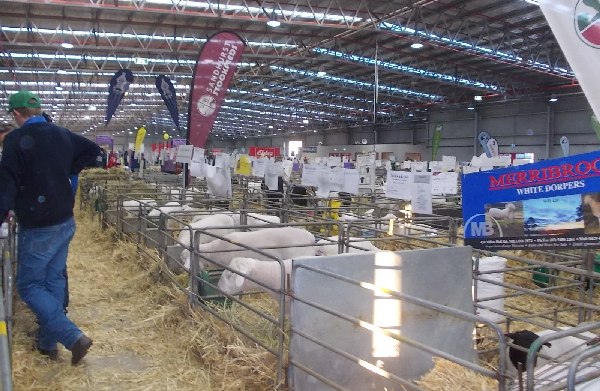 p on the first part of the tour, it is of South African significance that the Dorper  display filled up an entire exhibition hall at the Bendigo small stock show.  We met a number of South Africans when this photo was taken right at the start of the National Dorper sale in Australia. 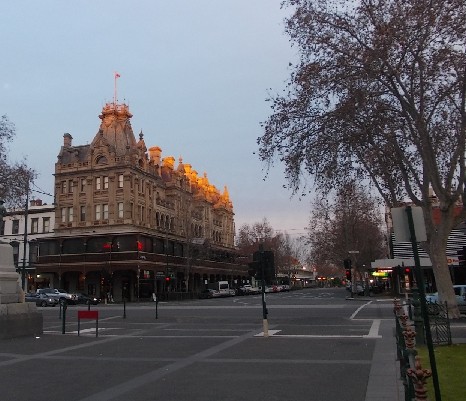 Photo right: Before leaving Bendigo on tour to Dubbo we had the opportunity to visit Bendigo’s major land marks – The Museum and statue in remembrance of this gold mining area of the past’s participation  in the first world war. 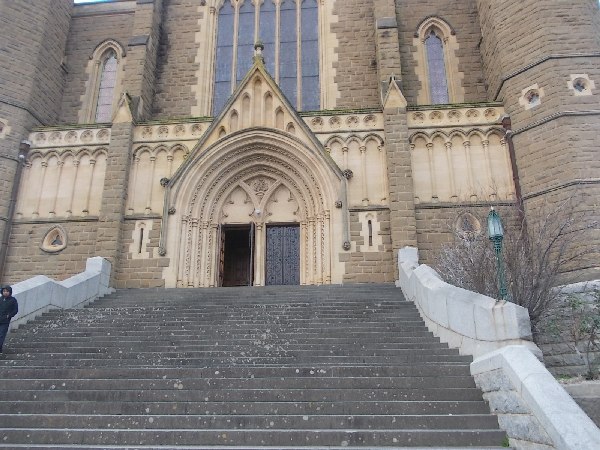 Photo left: Another landmark visited – The impressive Sacred Heart Cathedral that overlooks the Centre of this city of historical significance in the gold mining history of Australia.

Photo right:  Right after crossing into NSW over the Murray river,  the tour visited the largest pig production unit in Austalia.   This unit with 198,000 pigs on its premises, is responsible for 17 percent of Australia’s pork production. The size of this animal production unit which also includes a 2,000 ewe strong commercial Dohne Merino flock, is just mind boggling.  True to the Australian sense for orderliness, the access point in the photograph funtions as a bio-security check point. 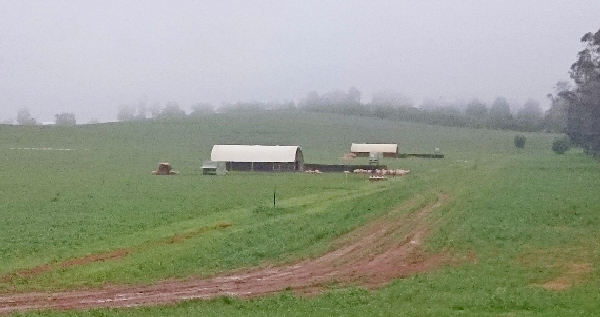 Photo left:  The visit was hampered by exceptional  rainy conditions and the section of 4,000 free ranging sows could only be observed from a distance from inside the tour bus. 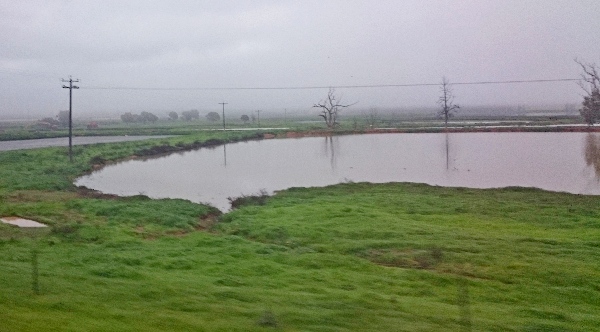 Photo right: Effluent dams from the piggery are used for irrigation after the methane was burnt of by special methane burners, The manure is also used for crop production and some of it is bagged and sold.

Photo left: At the time of the visit the unit delivered 25,000 pigs per day to be slaughtered. The unit’s size and efficient use and recycling of all resources set an example for all to be followed. 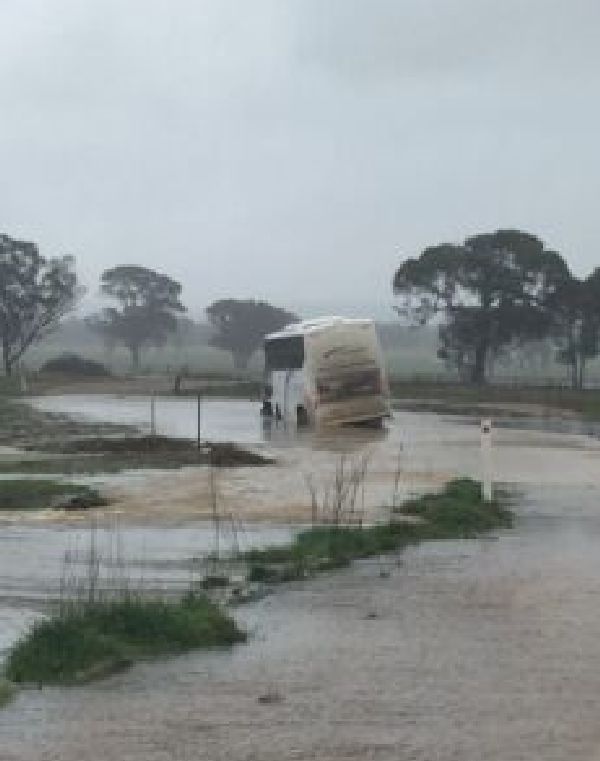 Photo right:  After leaving the pig unit, disaster struck on the way to the Gullendah  Dohne stud.  We South Africans experiencing drought conditions at home, was very impressed with the amount of rain that fell in the very flat Riverina area until our suitcases became wet !   Fortunately the Aussie farmers reacted very swiftly and with the help of a huge John Deere we were quickly back on the road. 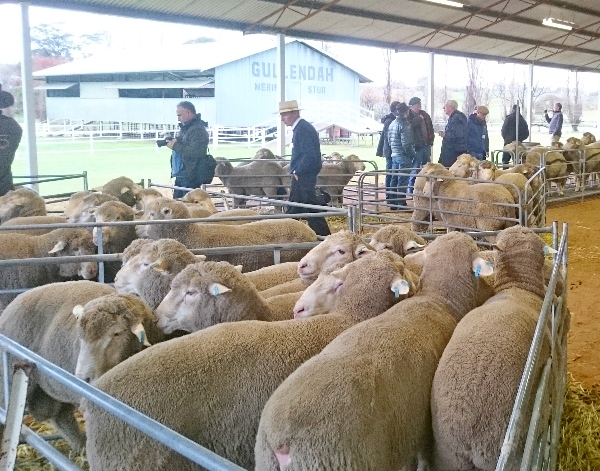 Photo Left:  Excellent young Gullendah Dohne sales rams were on display for the tour group.  The Gullendah stud was established by means of upgrading from a pure merino flock.  The Australian farmers are Masters at multiplying newly introduced genetic material and this stud is no exception.  Mention was made about the problem of too high protein levels of the natural grazing on this flat and fertile winter rainfall area.  This is possibly the main reason for maintaining very much higher levels of wool production than we South Africans are used too. 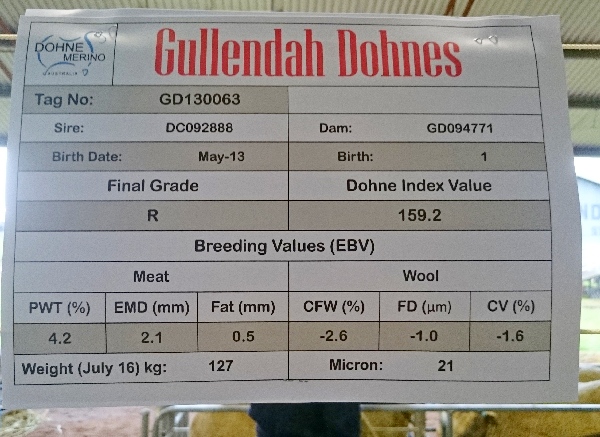 Photo right:  Information supplied by the Australian Dohne Merino Association to evaluate Australian Dohnes. PWT indicate Post weaning growth rate; EMD Eye Muscle Depth.   The rest of the abbreviations are self explanatory.  Note the extreme high Body weight of the ram in question, also display a relative high fibre diameter (21 µ but -1.0 breeding value) that indicate  fantastic environmental conditions for woolled sheep production.  The overall merit of 159 in terms of the Australian Dohne Index Value,  was the highest seen on the day. 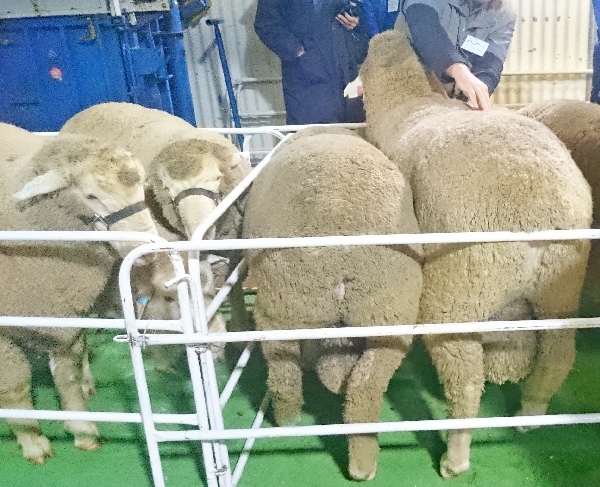 Photo: Some top Gullendah rams with open faces.   From the bit more pleaty young lambs seen, it was clear the wool production potential is much higher than South African Dohne Merinos.  However pre-weaning growth does not feature in their selection on account of the stage of marketing being a bit later than in South Africa.  It can therefore also, generally speaking, be expected  that the conformation of Australian Dohnes are to be a little lanky. 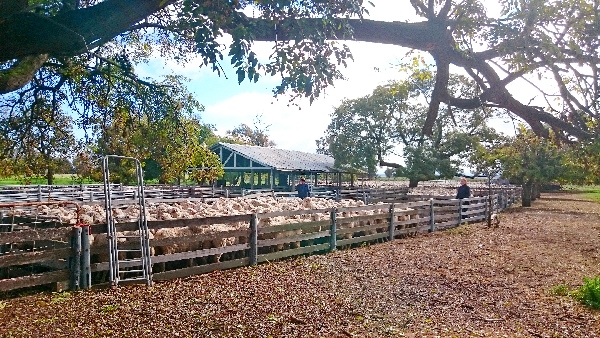 Photo: On the same day, Tom Holts Coonong Dohne stud was visited. He produces enough Dohne Merino wool from his 35,000 strong flock, to secure a contract with quantas for their clothing.  On the photo are 4,000 unclassed maiden Dohne Merino ewes. 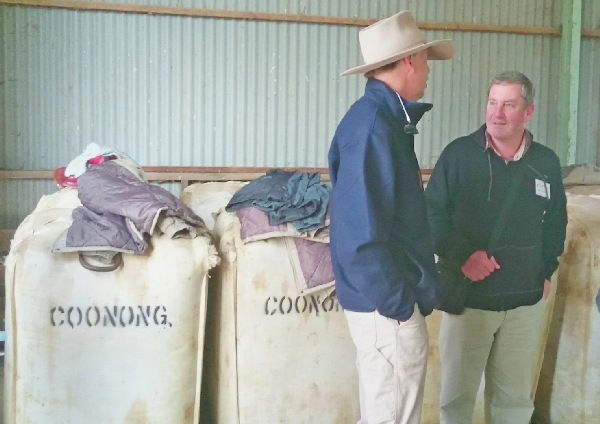 Photo: Tom in discussion with John Morris.  Management of such vast number of sheep without  an extensive labour resource, was high on the South African visitors’ agenda. 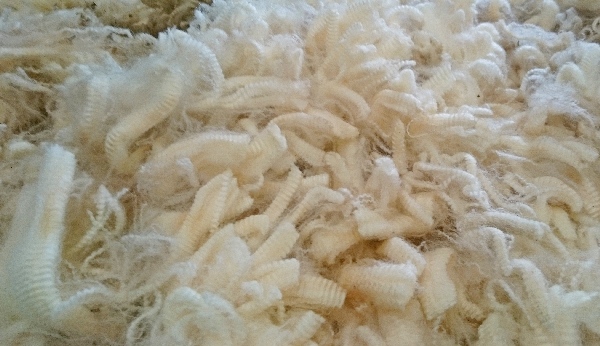 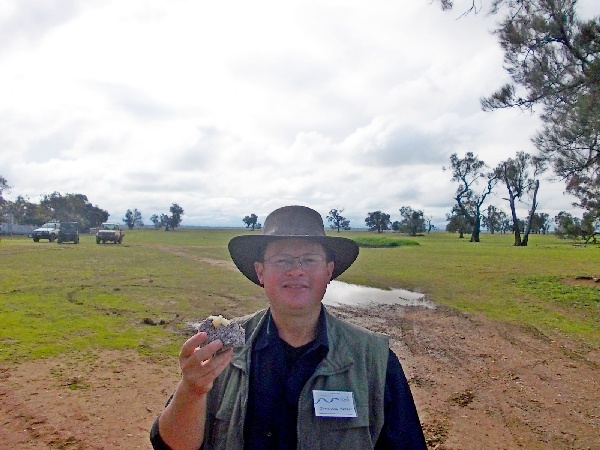 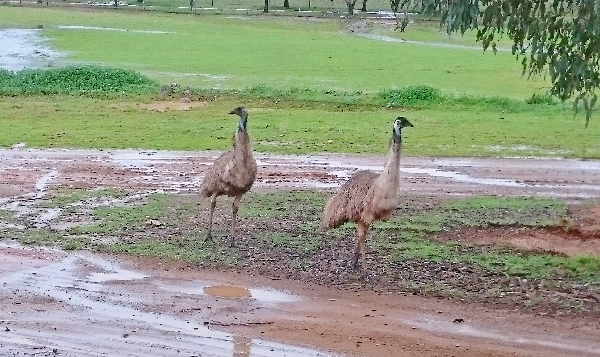 Late the same afternoon, the tour paid a visit to Roseville park Dohnes. Here we were met by the first Emus on our visit by Australia. Mr. Graham Coddington and Susan Coddington hosted the tour for the evening. Apart from viewing their Dohnes, they also staged a demonstration of how they put drones to use on their farm. Later in the evening a jackaroo also entertained the tour by cracking two whips simultaneously, to create musical rhythms.

From here the tour went on to Dubbo, as discussed in the following article