The pre-conference tour formed an integral part of this prestigious event, and it already led to lots of discussion in South Africa before its start in Melbourne.

This account of  the pre-conference tour, includes aspects of a technical nature, interspersed by some of the interesting incidents of a tourist nature.

Lots of “sheep talk” and networking with sheep breeders of all over the globe, as well as some serious technical discussions was the main dish on each day’s menu.  However, true to the nature of South African farmers, time was also made for lot’s of humour and a quick visit to a main tourist attraction.

En-route to Melbourne some members of the South African contingent, took the very brief opportunity to take a glimpse of the Sydney bridge and opera-house.  The photos taken (below) evidently proofed that their attempt was not in vain!  Unfortunately this first but brief  acquaintance with Australia, did not provide for a proper sundowner.  Departure time for Melbourne, did not allow it. 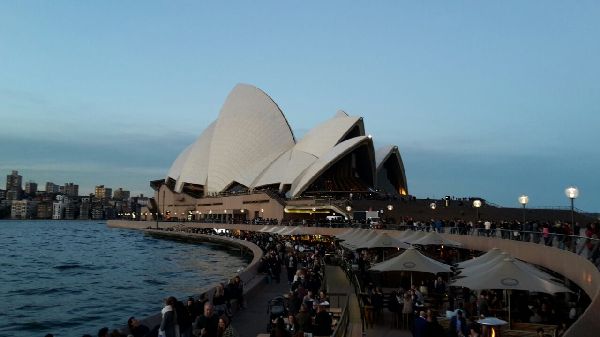 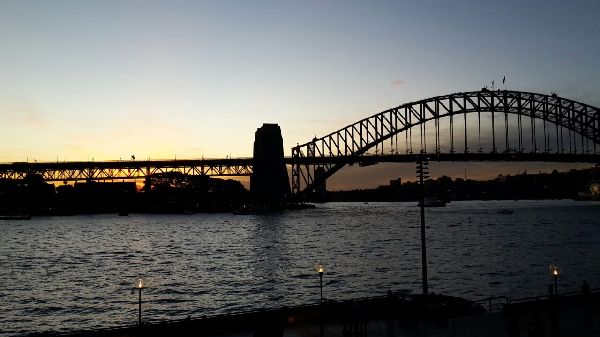 After a good night’s rest in Melbourne, our very competent tour guide and bus driver, Tim, collected all the tour members including a number of delegates from South America as well as Tom Filbin from the USA and their luggage to depart for the city of Bendigo where we stayed for three days.  Throughout the tour, Tim, employed by Langley’s coaches, provided excellent accurate and timeous service. 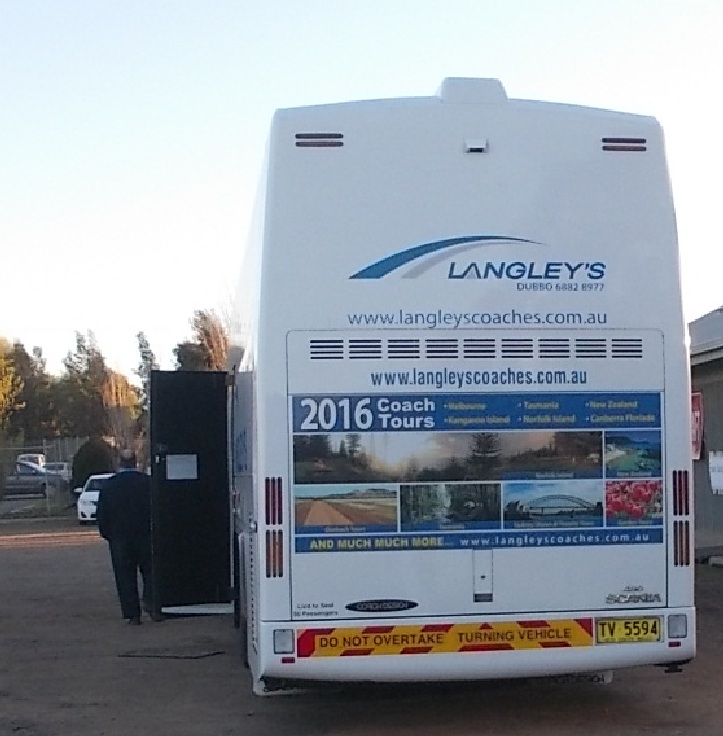 From an outsider’s point of view the Dohne Merino show was a great success from a marketing point of view.   The Australians definitely experienced a few teething problems as expected.  It was clear that the Dohne Breeders were not experienced in aspects of professional handling of show sheep.   However their hospitality more than compensated and they even offered the South African visitors the opportunity to assist as handlers! 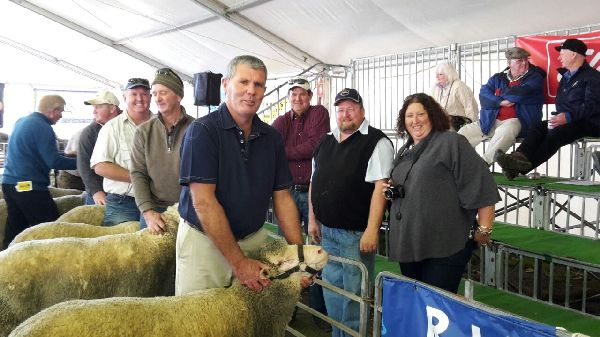 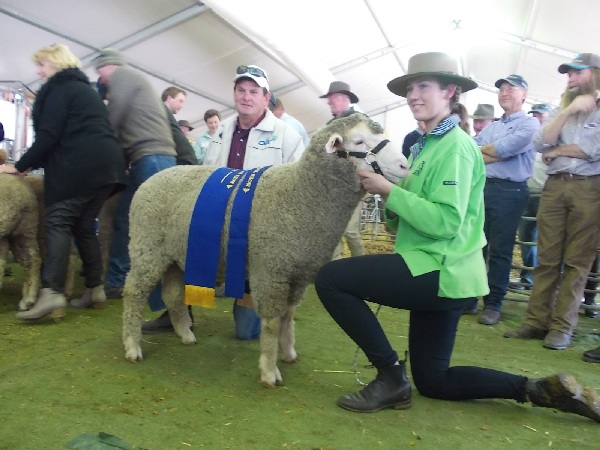 Photo right: Koos Vosloo, President of the South African Dohne Breed Society had the privilege to award the champion of the second class of rams judged on the show.  Thereafter he and Dr. Kobus Delport were called on to award more first prizes for various other classes.

Results from this first show for Australian Dohne Merinos, once again confirmed the huge educational task concerning the use of visual appearance even when objectively measured, as sole indicator of breeding value.   All serious animal breeders and scientists alike of course are well acquainted with the “environmental bias” that relegate animal phenotype to a less accurate indication of  “breeding potential”.  This change of mindset needed, to judge animals by combining “BLUP-EBV’s” with phenotypic appearance, of course contributed to a large part of the criticism at this “Show for Measured Performance” 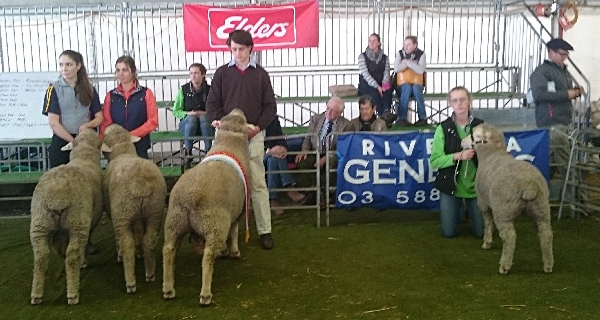 Even South African officials levelled lots of criticism towards especially the conformation of the rams.  The general feeling was that the measured performance in the form of Ebv’s,  had too much influence on the end result.   This is quite ironic, since genetic merit and not environmental effects in the sense of over-feeding, should be the core-business of stud breeding. 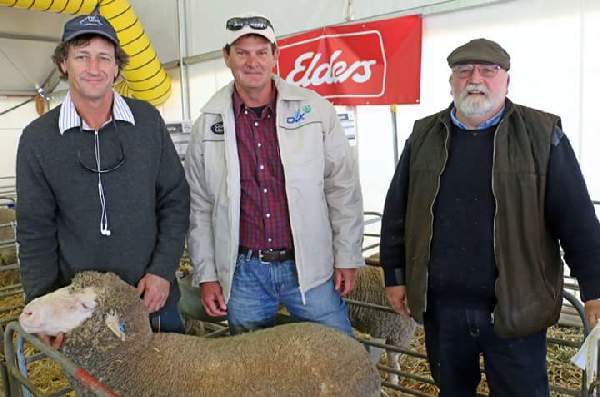 Photo right: John Nadine, Koos Vosloo and Gregg McCann discussing the merits of a ram to be showed.

Off course, the South Africans was on the look out for possible genetic material with potential to be imported to South Africa.  Therefore this Australian showcase was of special importance to all foreign visitors at the show.  South Africa can definitely benefit from the progress that the Australians made regarding quality wool production 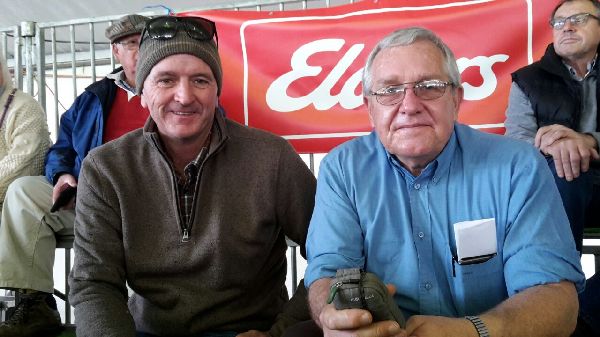 Photo left: Bruce Barnes Webb and Kobus Delport discussing the merits of the Australian judging system.  Obviously the economic environment in Australia, differs substantially from that in South Africa.  Having said that, enough common ground exist to justify exchange of breeding material and cooperation at various other levels. 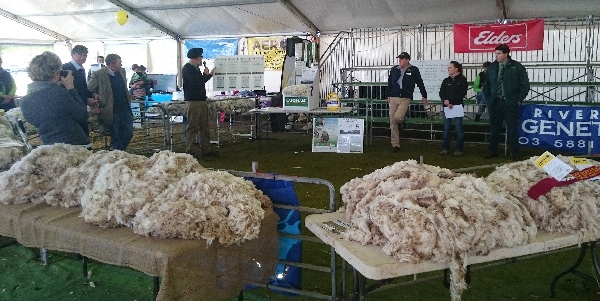 Photo right:  The Australian  Dohne Merino Association also participated in the National Fleece Competition.  The agents of the wool broker firms took turns to announce winners.  Dohne fleeces participated in a separate section from other breeds. 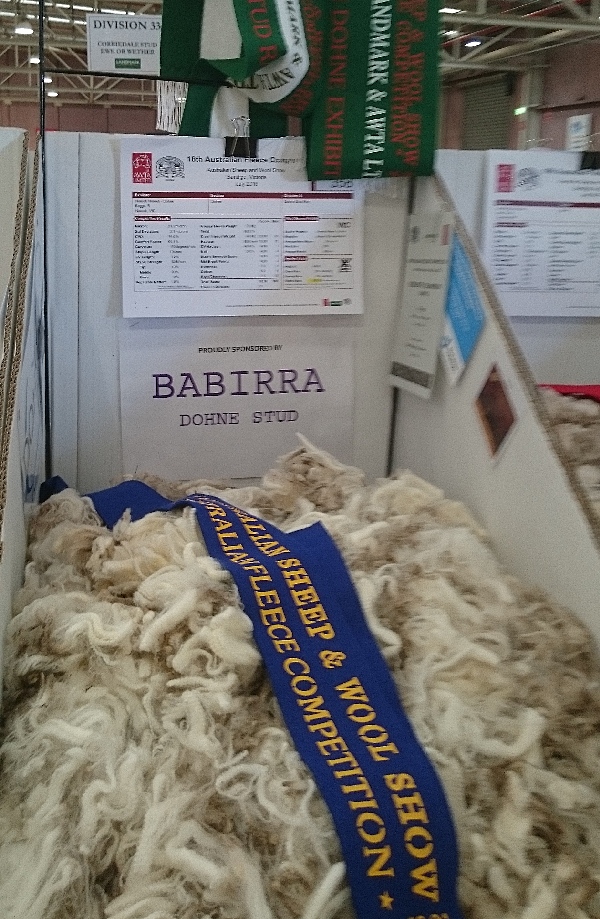 Photo left:  Richard Beggs exhibited the Champion Dohne Merino Ram Fleece.  It was quite informative to compare the fleeces in the Dohne Merino section with the merino fleeces and those of other dual purpose breeds.

It is noteworthy that the entire Australian wool clip moved towards fine wool.  The finest fleece in the competition measured 12.5 µ  and the value of the fleece was estimated on the official score card to be 112 Australian dollar. This merino ewe fleece of Kooringa Farming was incentally placed only second in its section!  Merino sections provided for ultra fine, Super fine, fine etc  classes.  When observing the fleeces on display that were of  such extremely high quality (MF1 types) and fineness, it becomes clear why the price premium for South African wool shrunk to such a small margin! 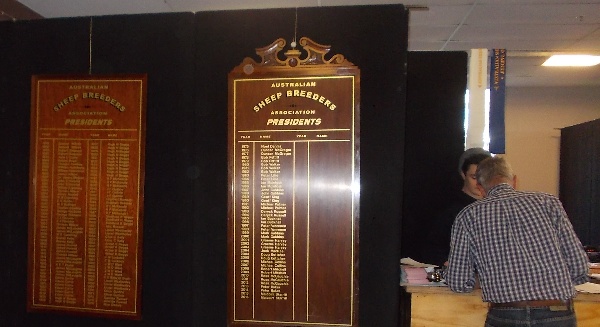 Photo right:  The role of honor of Australian Sheep Breeder Presidents in the foyer of the main  exhibition hall of the Bendigo showgrounds.   The Merino and several other breeds staged their national sale during this premier event in Australia. 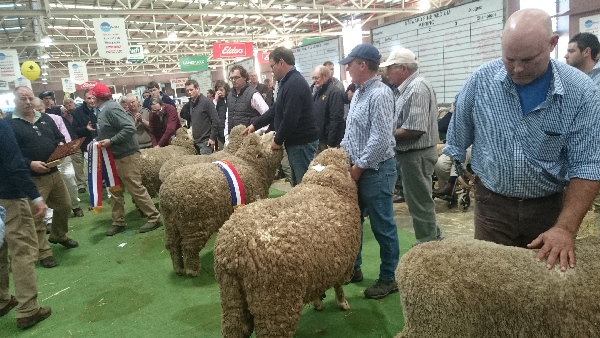 Photo left: Richard Beggs (with blue cap in the middle), who also runs a Merino stud,  exhibited the Grand Champion Merino ewe.  The emphasis on wool production and fineness in especially Merino sheep is very clear. 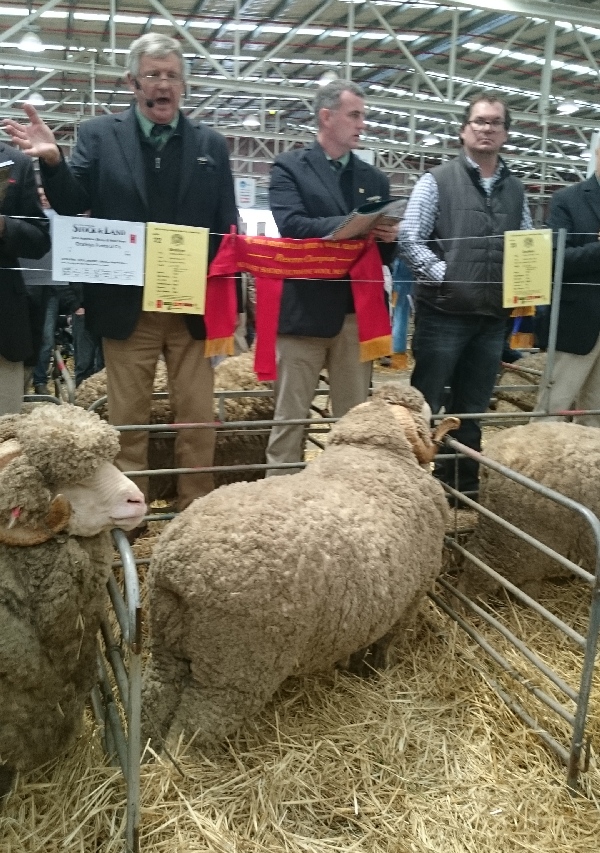 Photo right:  The Merino champion ram was auctioned on the Australian National sale for the highest price of 15,000 Australian Dollar. 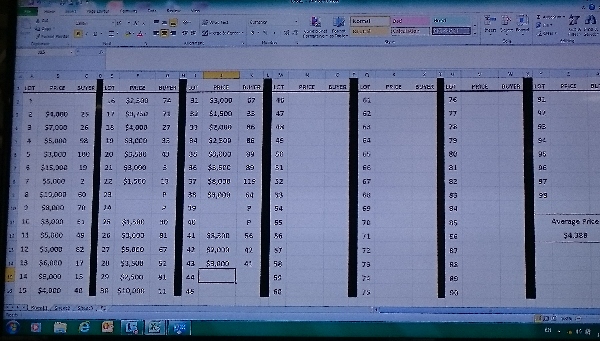 Photo  left:  A useful tip to our South African Auctioneering firms is this sale result displayed on a big television screen.  As the sale progressed, numbers of persons followed the result and especially the change in average price, to make up their minds on that to buy at what stage of the sale!