Compared to 2016 all autumn production sales for 2017 are, practically spoken, finalized.  There are still one production sale to come on the 24th of March 2017, but this particular sale did not take place in 2016.   It is therefore reasonable to, at this stage,  compare the 2017 production sales results to that of 2016.  In 2017 a total of 1126 rams were sold at an average price of  R10206.   This is the first time in history that the average price of any sales season for Dohne Merino rams passed the R10000 mark!  The figures for 2017 (table 1) represent a total of 38 rams more sold than in 2016, at an average price of R2485 higher than that for 2016.  In terms of total turn over, the 2017 figure of R11,491,900 represent a R3 million  or 36.8 percent increase above the figure for 2016.  This astonishing increase in ram sales is difficult to explain.  Factors  that might have played a significant role, include off course,  recent good rains after the prolonged drought, but also the relatively high productivity and efficiency of utilizing available veld of the Dohne Merinos during the dry spell.  It is also reasonable to assume that the high wool prices maintained for a number of years now, linked to the recent increase in lamb and mutton prices, boosted confidence of both commercial and stud farmers in the profitability of the breed.

In conclusion the South African Dohne Merino proved its intrinsic value as a self replacing dual purpose breed. 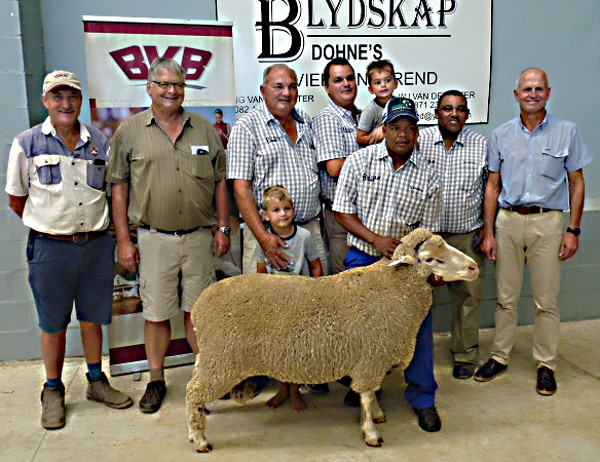