The Dohne Merino Breed Society congratulates Cameron McMaster on his 80th birthday. Cameron’s birthday was on the 25th of January but the celebration took place on the 22nd of January 2017 at his home in Napier. The celebration was in the format of a dinner for all his loyal friends. Cameron is still very active in the world of Dohne Merinos. Since he served for 30 years as manager of the breed society between 1970 and 2000, he featured regularly on the international scene including symposiums, conferences and workshops. He held numerous Dohne Merino workshops in both South America and Australia. He also received a number of awards from the sheep and wool community in South Africa and abroad. The latest award being the honorary life membership of the Australian Dohne Merino society. Cameron lately also wrote the prestigious book on the development of the Dohne Merino in South Africa and abroad. The purpose of writing this reference coffee table book, was to be the main focus of the celebration of the 50th year of existence of the Dohne Merino Breed Society of South Africa.

Cameron is currently in good health despite cancer being diagnosed a few years back and being treated. All Dohne Merino enthusiasts wish him a wonderful year of good health and prosperity. 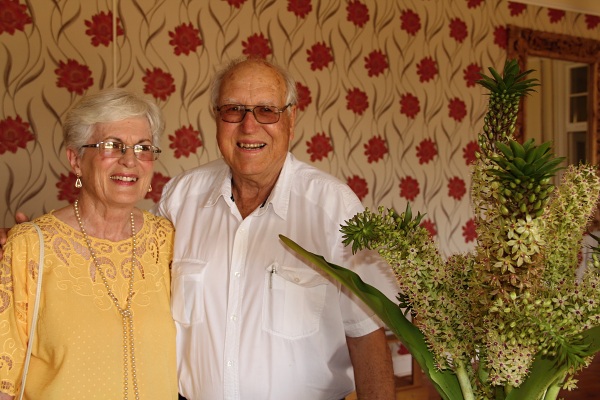 Photo : Rhoda and Cameron McMaster at the celebration of his 80th birthday