Members of Region 5 held their second very successful yearly meeting in Bloemfontein to hone breeders skills in the use of the Dohne Merino system to its full potential.

The effective incorporation of advanced technology such as AI., oestrus synchronization, PMS-treatment and even embryo transfer into the Dohne Merino breeding program were discussed in depth with Me. Henriette Stafford of Ramsem and Dr Delport. The opportunity was also used to introduce breeders, hands-on, to the upgraded Shepherd 122 on-farm recording system by Mr. Arno Van Graan.

Henriette Stafford presented a captivating talk on all management aspects regarding both rams and ewes to be considered when employing accelerated reproductive techniques. From her presentation it became clear that the following of proper management guidelines is basic to the spectacular increases in profitability achieved when using these techniques. High reproduction rates also provides the opportunity to accelerate genetic improvement through higher selection intensity. However, it must be noted that these advanced techniques also imply that the environment in which the animals function, is temporarily changed. Rams especially, may in some instances be deprived of the opportunity to prove their mettle during natural mating. Henriette warned that regular exercise and measurement of mating behavior needs special attention under such conditions.

Hardiness and adaptability is the main breeding objective of the Dohne Merino breed. Use of these techniques as well as lambing in lambing pens, were obviously questioned as being artificial. On the other hand these so called “artificial” procedures are already part and parcel of many “Mega” commercial farming operations. It became clear from the discussion that the current challenge to stud breeders, is to retain hardiness in their flocks while at the same time to exploit the full potential of the Dohne Merino to maximise profit. The practical implication comes down to meticulous recording of specific management procedures followed on all animals as well continued selection for hardiness traits.

In terms of animal recording it means that groups of animals and their dams treated differently than the rest of the flock (Laparoscopy, PMS etc.) have to be identified as separate management or contemporary groups. Providing an accurate description of all possible environmental factors is absolutely crucial to accurate breeding value estimation!

Hardiness itself can only be measured indirectly. It is generally accepted that reproduction followed by high growth rates are the main indicators of hardy and adapted animals. It is therefore crucial for stud breeders to maintain high levels of selection pressure for these traits. Breeders cannot sit back and be satisfied with the levels of reproduction achieved on account of improved management. Not only breeding values for direct and maternal weaning weight but also EBV’s for number of lambs weaned, will play an increasingly important role in selection. Effective ewe selection will rely progressively more on ewe productivity records rather than only on own body weight and wool production. 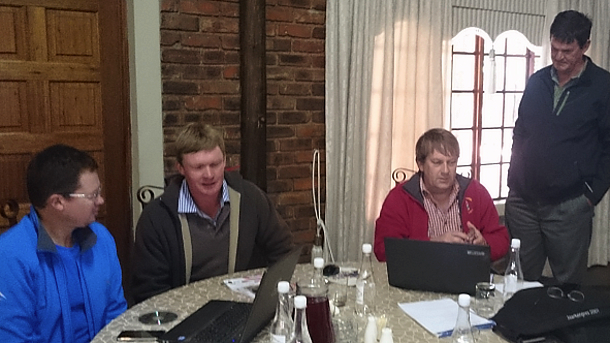 Mr. Arno Van Graan helped Stud Breeders to install Shepherd 122 on their computers. This upgrade facilitate classing lists in line with the change to the Dohne Merino system to emphasize lamb growth and reproduction rather than adult body weight. Arno also demonstrated short cuts and other improvements to the previous version of Shepherd. His advice proved invaluable to streamline recording of reproduction and other data. He also demonstrated how to put Shepherd to its full use to effectively use resulting information during selection.

On account of two successful events already staged under leadership of Mr. Louis Nel, the Region 5 management committee decided to expand next year’s event to a much larger audience including Dohne flock farmers and possibly members of adjacent regions.