The success of the Dohne breed, locally and internationally, relies almost entirely on scientific selection methods under ordinary flock farming conditions.  Application of scientific principles to optimize productivity of the entire flock, is basic to the understanding and effective use of the Dohne System. Therefore the Dohne Merino course is one of the core businesses of the Dohne Merino Breed Society.  The course uses  a hands-on approach to effectively train flock farmers, stud breeders and inspectors alike, to not only class sheep scientifically,  but also to interpret scientific management and breeding principles in practise.

The main course of the Society, presented at Dohne research station and the EDCN stud of Mr. Richard Armstrong, was attended by 14 students this year.  The students included two students from Chille – Nicholas and Franciska Petrovitch.   The Petrovitch’s are a twin brother and sister and they farm with their “Patagonian Dohne Merino ” stud and flock on a farming unit of 16 000 ha.    The average mark for this course was 63 present and six officials as well as the two Chillean visitors qualified as New Dohne Merino inspectors.  We trust that every student and inspector will apply their acquired knowledge to the benefit of their own enterprise and work environment.  The society want to convey its gratitude to Mr. Gary Trethewey of BKB, who competently assisted with the practical sessions.  Mr Richard Armstrong makes an immense contribution, year after year, to make his animals available and to select specific animal examples together with their information (data).   His and his staff’s commitment for the duration of the two days of practical classes, is basic to the success of this course.  Thank you Richard and Mandy. 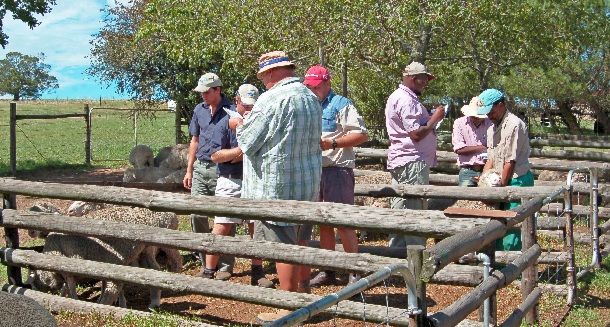 The second course of 2016 was presented to the students of the Central University of technology (CUT) at their impressive Bloemfontein campus.   The course to these students are so popular that attendance had to be restricted by their enthusiastic lecturer, Mr. Jan Jacobsz.   Practical sessions were for the first time presented at the Central flock Dohne Merino Stud of Mr. Wicus Jacobs, Reddersburg.  After completion of the practical examination, the 47 students, of CUT, had the additional privilege to view laparoscopy on the stud ewes by Dr Johan Steyn.  Dr. Steyn explained the procedure as well as the benefits derived from it by stud breeders like Mr. Jacobs.  The Dohne Merino Breed society is indebted to Mr. Wouter Vorster (BKB) who assisted with the practical sessions.   His way of putting the students at ease without compromising discipline, greatly contributed to the success of the practical sessions.

The next main course for Dohne Merino Breeders will take place at Elsenburg from the 8th to the 10th of June2016.  We already have a number of private registrations  apart from the Elsenburg and Stellenbosch University students.  We are looking forward to very exiting sessions aimed at the promotion and improvement of the Dohne Merino. 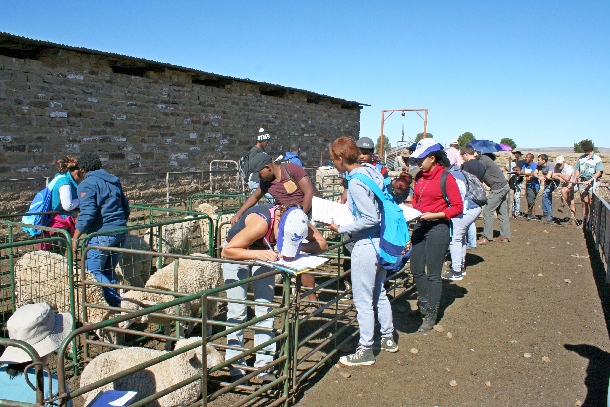 CUT students during their practical on a farm of Mr. Wicus Jacobs.

Written by:
Kobus Delport
Posted on:
23 May 2016
Posted in:
News
Recent Posts