Thorough scrutinizing and fierce competition amongst Dohne Merino Stud Breeders culminated in the identification of six regional winners of the DOHNE MERINO TOP BREEDER awards for 2015. 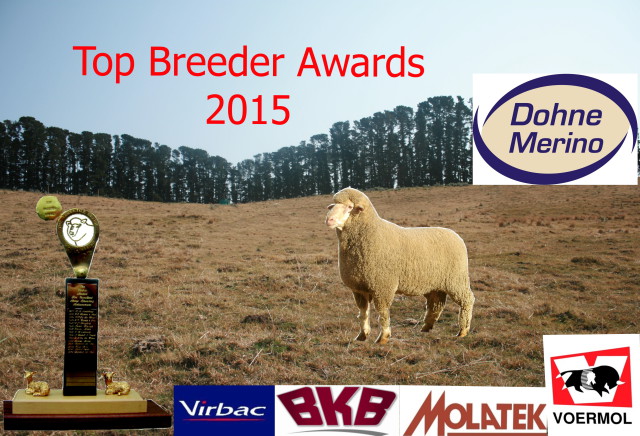 The Dohne Merino Breed Society wants to make use of the opportunity to convey our gratitude to our sponsors Virbac, BKB, Voermol and Molatek. These Sponsorships are the only reason for the long term existence of this most prestigious event.

Criteria for this competition are strictly objectively evaluated and covers all aspects of stud breeding including prompt and accurate animal recording, stud administration, marketing and breed promotion. Special emphasis is placed on the efficiency of use of records to effect genetic progress. These aspects include efficient management during testing phases, generation interval, selection differentials maintained as well as number of appearances on sire lists. Participation in official sales (including the National sale) and stud information days held all serve as criteria to evaluate breeders regarding effective marketing and breed promotion. The winners of this tough competition can justifiable be regarded as front runners in the small stock industry!

The following winners will compete for the title of National Dohne Merino Top Breeder of 2016: 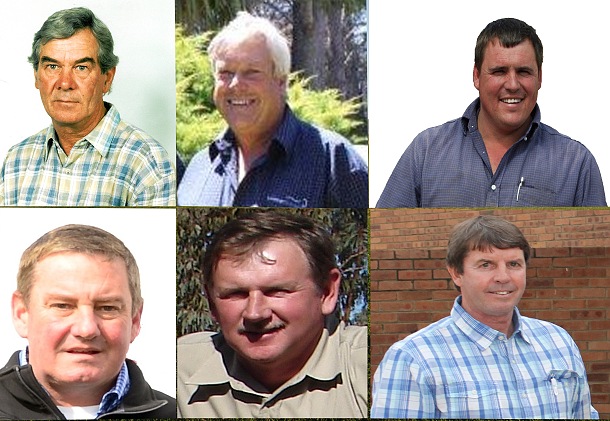 Our sponsors are the only reason for the long term existence of this most prestigious event. The Top Breeder competition not only rewards individual breeders’ performance but also encourages all stud breeders to continually improve on their methods followed, to breed even better Dohne Merinos. The competition focuses on efficiency rather than stud size, and therefore all criteria are as far as possible calculated on a per registered ewe basis.
The following paragraph’s intend to highlight the excellence of each winner’s Dohne Stud:

Frans Marx established his stud way back in 1975 by means of only fifty ewes bought from Mrs. Anna Kotze (Daugher of the famous founder of the Dohne Breed, Oom Koot Kotze). FEM Dohnes made an enormous contribution to the South African Dohne Merino genepool. This success can to a large extent be ascribed to extremely high selection intensities maintained as well as diligent application of the principle of open nucleus breeding. Every person involved in Dohne Merino Breeding knows about the influence of the famous SD ram (SD92.0764 of which more than 4000 progeny were registered) on the entire Dohne Merino stud industry. Not only did the FEM stud won regional Top Breeder awards on numerous occasions, but were crowned as national Top breeder on three occasions in 1990, 1998 and 2004.

This stud run under extensive low rainfall conditions, currently consists of 600 ewes with a lambing percentage of 135 percent. Frans Marx’s philosophy of pursuing precision farming in an arid environment is also being transferred to his son Andries, who is also intensively involved in developing FEM Dohnes, One of the very best Dohne Merino studs in South Africa. The strategic Feeding policy of only providing supplementation that produce sufficient economic return, includes supplementation of twin bearing ewes and creep feeding for twin born lambs. The Marx family also adds value to their clip by means of direct marketing. Recently lamb and hogget wool were sold for more than R100-00 per kg. Under this severe conditions clean yield percentages of approximately 69-73 percent are maintained. The prerequisite for producing excellent wool under this harsh climatic conditions remain ” plain bodied animals with excellent meat conformation”.

The hallmark of this Top Dohne Stud is genetically high quality animals over a period of approximately 40 years! The Dohne Merino industry congratulates the Marx family on this outstanding achievement once more.

The Lowmar Dohne stud was estashbished in 2008 when Mr. Phillipie Mararais and Mr. Hugh Collett (Lowlands estate) combined their two studs into one stud. During this amalgamation, the 500 most productive stud ewes were selected out of a total of 1400 stud ewes available at that time. This selection had a major effect on the average merit of the stud that currently consists of 600 ewes.

Lambing percentage of Lowmar Dohnes stands at 153%. This high level of reproductivity is ascribed to the effect of strategic management as well as the extremely strict selection of ewes.

Mr. Phillipie Marais claims that the stud is run for approximately 75 percent of the time on good Karoo veld. Although fodder under irrigation is available at times, both the stud and flock have to make use of harvest rests for two months of the year. He is also very proud of the fact that his Dohne wool produced under these conditions, was recently sold as type MF3.

In terms of breeding policy the emphasis is on ewe records and reproduction. Mr. Phillippie and his son, Japie is of opinion that smaller ewes with better conformation are the most productive in their case. Accurate lambing records are used to perform ewe selection. This type of animal seems to be adaptible to a range of farming conditions. Young rams are kept under veld conditions and are being put onto lands only before sales. The Lowmar stud claims that their management and feeding regime fits well with that of their clients of which a large percentage are extensive small stock farmers.

The Weska Dohne Merino stud distinguished itself during the past year by not only selling one of the highest priced rams at the national sale but also by breeding the top potential young sire (General Merit) on our latest sire listings. The stud also sold an all time record priced ram on its production sale.
This extraordinary performance was accomplished by dedicated stud breeding since establishment of the stud in 1974. According to Mr. Boeta Wessels, ewe records were used to select ewes for stud purposes at the very beginning of the stud that now consists of 750 ewes. The lambing percentage of 159 percent is basic to the success of this Top Dohne Merino stud. The high lambing and weaning percentage provided this stud the opportunity to not only maintain high selection intensities but also to concentrate on farming with more productive ewes. A good example is the recent selection of 14 top old stud ewes. On average these fourteen ewes were mated 5 times and they produced nine lambs each of which 8 were weaned. Average weaning index of the lambs was 108 and the ewes average EPI was 14.1. According to Mr. Boeta Wessels it is most encouraging that this excellent physical performance of his ewes translates back to the original figures from the Dohne system by which they were selected. Breeding values for weaning weight direct and maternal of these lambs were +1.35 and +0.88 (both figures in the top 10 percent of the breed).

Stud sires are obviously selected only from top performing ewes (“ewe cards” used). The policy of sourcing top rams in the breed irrespective of the locality of the ram/s, is obviously paying dividends for Mr. Boeta Wessels stud.
Mr Wessels’ entire farming system is included in an Agricultural study group and all subdivisions’ economic performance gets evaluated on a per hectare basis. He is proud to mention that his Dohne enterprise (Stud and commercial sheep managed as one unit) is performing excellent on a per hectare basis!

The Terra Vino Dohne Merino stud serves an extremely important educational purpose in the stud industry. John Morris is on a yearly basis involved in one of the two main breeders courses presented by the breed society. Originally the stud was established by means of ewe donations from pioneer breeders in the Stutterheim area, therefore rendering the US-stud one of the “older” studs in industry.
The Terra Vino stud comprises of 425 ewes for which 150 Ha. land is reserved on the Mariendal experimental farm. Extremely high stocking rates are applied and the lambing percentage of 166 percent is regarded as a remarkable achievement. This stud is run on a strict financially independent basis and has to be profitable. Supplementation bought in, has to be utilized very strategically for very specific supposes. E.g. Twins are supplemented to be comparable with singles and rams receive the minimum supplementation necessary to maintain them on the same level as ordinary commercial conditions dictate. The 15 ha irrigation available consists of a clover, Kikuyu grass mixture and the ewe flock has to be mated and lamb on this small space at a very high stocking density. Although advanced reproductive techniques are utilized on a portion of not more than 150 ewes to introduce new genetic material, John Morris prefers natural mating. He claims that in his case, natural mating produce the better results.

The terra Vino stud participated in the Kromme Rhee group breeding scheme and its basic genetic improvement philosophy still centres around acquiring the best possible genetic material for the studs purpose irrespective of the source. John Morris believes that producing more lambs “come at a cost”. Some other aspect for instance wool production or body conformation may start deteriorating since a ewe can only take a specified amount of food in to produce these products. Balance is therefore the keyword to improved productivity.

The Dohne Merino society congratulate the terra Vino stud on this excellent achievement!

Region 5: Nello Dohne Stud, Brandfort.
The Nello Dohne stud was “re-established” in 1990 by Mr. Louis Nel. He made use of ewes from his father and bought stud ewes from various sources including Mr. Leslie Higgs (of Wallrich fame). During the past two years Mr. Louis Nel made a huge contribution to promote the Dohne Merino breed by means of convening very well attended conferences on behalf of region 5.
The Nello stud currently consists of 700 ewes run in a typical mixed farming environment of the Orange Free State. Last year, 150 lambing percentage was recorded. According to Mr. Louis Nel, this excellent performance is the result of strategic management at mating and lambing. Lambs run on natural grazing during summer. In fact young rams are tested under similar conditions than a veld ram club. According to Mr. Nel, it is not possible to “pamper” a group of 300 young rams! Only after selection, the smaller group of selected superior young rams receive additional feeding and management for sales purposes.

When Mr. Karel Nel combined his efforts to start breeding Dohne Merinos with Nello in 2001, the studs genetic level were uplifted. The ewe flocks are kept separately but testing and selection of young animals takes place in combined single contemporary groups. Once again the effect of having larger numbers of animals available for selection, demonstrates its impact! In an area of fierce competition regarding meat production from small stock, breeding policy dictates to prioritize reproduction, growth rate and conformation. According to Mr. Nel, you have to be a good stockman to maintain the high levels of profitability needed in the current economic environment. He makes use of oats during winter as well as harvest rests to supplement his animals (especially twins) during periods of food shortage.

The Dohne Merino Breed society wants to congratulate the Nels on winning the regional top breeder award for the second consecutive time!

Mr. Clark Rattray established his Mount Pleasant Dohne Merino Stud in 1994 by selecting a small nucleus of the best ewes out of his Late father’s ( Craig Rattray ) Milburne Dohne Stud. Currently the Mount Pleasant stud consists of 260 Stud ewes. Over the past five years this relatively small stud maintained a lambing percentage of 150%. Strict selection led to only 0.226 AA rams approved per ewe lambed. Mount Pleasant Stud rams regularly feature on The Dohne Merino Breed’s Elite and young sire lists (.069 and .165 rams per stud ewe). The stud performed extremely well over a long period of time at National sales. The performance of this stud at the past National Sale needs special mention. The average price of R78 750 for four rams sold, definitely set a new benchmark for stud breeders to beat (see sales results). The Pleasant View stud is well recognized for breeding rams with excellent conformation and a number of sires from this stud appear on the society’s sire lists (Elite and Young). Clark is also newly appointed on the council of the Dohne Merino Breed Society and is already promoting the breed at agricultural institutions in KZN.